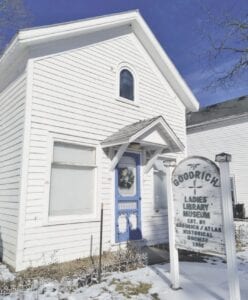 GOODRICH — Some $60,000 in federal Community Development Block Grant money has been earmarked for the Goodrich Ladies Library Museum.

A program of Housing and Urban Development, CDBG primarily aims to provide safe, affordable housing and economic opportunities in low- to moderate-income communities. But the guidelines provide some leverage for funding other initiatives, such as senior citizen centers, public safety programs and historical preservation.

In the current round of funding, the Goodrich Village Council and Atlas Township Board of Trustees agreed to designate $10,000 and $50,000, respectively, for repairs to the museum, located in downtown Goodrich.

“It’s one of our oldest buildings in the community,” said Atlas Township Clerk and Goodrich/ Atlas Historical Society member Katie Vick. “It needs to be preserved and designated as a historical site, which is part of the agreement for the grant.”

According to the Genesee District Library website, in 1877, the 21 members of the Goodrich Ladies Association held ice cream socials, a strawberry festival and plays to raise enough money to start a library. The Goodrich Ladies Library began in a rented room with six books.

In 1883, the association purchased the diminutive clapboard building, once a residence.

The structure previously had a second wing, but a fire swept through the library in 1903, reducing it to its current size of 15 feet by 25 feet, historical records show.

The library became part of the Genesee District Library system in 1950. Thirty years later, when the GDL moved the Goodrich branch into the former village hall, the Historical Society took over stewardship of the old building, repurposing it into the historical museum to house local artifacts and archives.

As yet, it remains unclear exactly how the block grant money will be spent.

“We’re still waiting on final project approval,” said Vick. “It has tentative approval at this point. There are still a lot of logistical pieces that have to come into place. They are very specific on how we can utilize that money through this grant. It can only be utilized in ways to protect the historical nature.”

One of the logistical details that the village and township must work out is the bidding process.

Besides dealing with the bureaucratic details, village and township officials and society members must determine exactly what needs to be done, and prioritize their to-do list insofar as the budget – and the limitations on altering historic buildings – will allow.

“In the past, there have been some concerns about shoring up the floor,” said Kautman Jones.

After the fire, the building was moved to its current location, where it rests on an angled, cobblestone foundation.

“What if that (grant money) isn’t even enough to jack that place up and get under it?” she asked. “We have no idea at this point.

“When we redid the roof, it was a very long, complex process. I think we’re going to have to have someone with some background in historical buildings to be our first step-off point.”

The windows also need some attention, she said. And it’s likely that more needs will come to light upon closer inspection.

Regardless of the specifics, the historical society is excited about the possibilities.

“I think it’s going to be interesting as it unfolds,” said Kautman Jones. “I’m thrilled. I am just tickled to start on that process.”