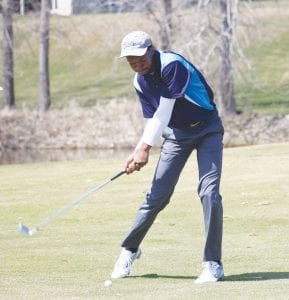 Carman-Ainsworth’s Haywood Petty hits off the fairway on the sixth hole during last Friday’s Lapeer Tuneup at Metamora Golf and Country Club.

METAMORA – Goodrich had the best player and the best team in the Lapeer Tuneup golf invitational last Friday.

Noah Rocheleau shot 77 and won medalist honors in a scorecard playoff, and the Martians totaled 342 to top the 13-team field by five strokes at Metamora Golf and Country Club.

On a sunny, 75-degree day, Rocheleau matched 5-over-par 77s with Oxford’s Matt Prince and won the scorecard tiebreaker with a birdie on No. 6, the toughest hole. Carman- Ainsworth’s Haywood Petty was third with a 79.

Goodrich senior Travis Veenhuis was fourth with an 80, while Josh Senkowski shot 91 and Thomas Bowers and Ben Locey each carded 94 to round out the Martians’ scoring.

Finishing out the individual top 10, Lake Fenton’s Wes Potts was fifth with an 81, freshman Dylan Mullaney of the Lapeer Green team took sixth with an 82, and Kearsley’s Brian Sams, Byron’s Brandt Nelson and Frankenmuth’s Daniel Wagner and Sam Struble all tied for seventh with 83.

Kearsley senior Evan Flood was just outside the top 10 in 11th with an 84, and Connor VanSteenburg was 16th with an 87 to spark the Hornets’ fourthplace finish. Tyler Phipps shot 100 and Kross Kenny 102 for Kearsley.

Backing Petty for Carman-Ainsworth were freshman Kaden Rytlewski with a 104, junior Noah Vanderhyde with a 105 and sophomore Tyson Fields with a 113.

The tournament was held at Metamora for the first time after nearly 25 years at Lapeer Country Club. The move followed the merger of Lapeer East and Lapeer West high schools. Metamora had been East’s home course from 2011-14 and now serves as Lapeer’s home course.

GRAND BLANC: The Bobcats opened their season April 15 with a thirdplace finish in the Kensington Lakes Activities Association preseason tournament at Timber Trace in Pinckney. Grand Blanc totaled 332 on a challenging course that yielded an average individual score of 90. Alex Finsterwald placed sixth with an 80, Noah Troyer and Anthony Castanos each shot 83 to place in the top 10 and Logan Price was 18th with an 86.