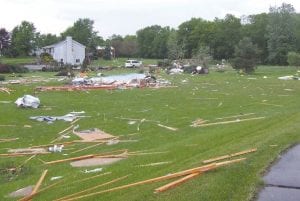 A wide view of the debris field behind the Mahaffy home, showing where the neighbor’s business once stood.

GOODRICH — Sources report at least one tornado touch-down as storms rolled through the area overnight, but Fire Chief Fred Forys said as of the morning of May 29, clean-up was just getting started.

Forys and Atlas Township officials are assembling teams and coordinating damage assessment to several areas — the hardest hit being near the intersection of Gale and Hegel roads.

A homeowner, Ashlee Mahaffy, and her small children are safe, having ridden out the tornado which destroyed their house, in the basement.

Neighbor Jim Seeling also suffered minor damage and said Mahaffy and her husband recently moved to the area via a job transfer through his employer, General Motors.

Mahaffy’s mother was walking through the debris field collecting photographs and mementos, including a quilt handmade by her mother which she was overjoyed to find intact.

Next door to them, K-9 Kountry Grooming, run by owner Sue Hegel, was housed in her garage — which was also completely destroyed.

A van parked in the garage suffered a typical tornado event — with a 2-by-4 board through the driver’s side of the windshield.

Township Supervisor Shirley Kautman-Jones and Forys were out surveying the damage early before sending assessment teams out to the area, as well as reports of damage along Dutch Road and M-15, but nothing as severe.

Additionally the Genesee County Road Commission suffered the loss of a building at the intersection opposite of the Mahaffy home.

“I grabbed her and our animals and ran downstairs. We rounded up essentials and got down there,” said Mike Reed. “I flipped a couch over (Kylie) and we heard loud, loud rain and then ‘whoosh’ and it was over.”

Reed said they had a deck, which didnt belong to them in their backyard.

Mattresses and other household goods were scattered for miles, with residents all the way over on Dutch Road finding photographs that belonged to the Mahaffy’s.

“We’re just going out to do assessments now,” Forys said at approximately 9 a.m. He was happy to report there were no severe injuries, including the safety of the Mahaffy family.