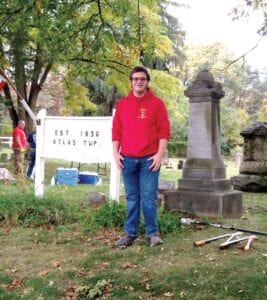 Eagle Scout candidate Zach Jowski led a team of Boy Scouts from Troop 340 in a clean-up effort at the old Horton Cemetery in Atlas Township. Photo by Lania Rocha

ATLAS TWP. — Tucked into the rolling landscape of southern Atlas Township is the Horton Cemetery.

The small, tree-filled plot of land was established as a burial ground 184 years ago, and now serves as the final resting place for 160 or so souls, including Revolutionary War soldiers John and William Britton.

On Saturday, Oct. 10, the grounds were full of life, however, as Boy Scout Zach Jowski led a team of about 20 fellow scouts in a clean-up and preservation detail.

The effort served as Jowski’s Eagle Scout project. He is a member of Boy Scout Troop 340.

Atlas Township Trustee Pat Major recommended the cemetery clean-up after Jowski consulted him. Jowski said he received a few suggestions, but chose this one because he felt it would be the most productive for the township.

The work included cleaning tombstones, trimming trees, repairing the fence and performing various other maintenance tasks. Jowski, a 2020 graduate of Goodrich High School, started in scouting as a Cub Scout when he was 5 years old.

At that time, he wanted something fun to do, other than playing on a game station.

“There is a big transition from Cub Scouts to Boy Scouts,” Jowski said. “When you’re in Boy Scouts, it’s fun, but it’s some of the hardest fun you will ever have.”

Scouting has taught Jowski leadership skills, and how to get things accomplished, he said. “The point of the Eagle Scout project is to demonstration leadership,” Jowski said.

Jowski is currently studying electrical engineering at Kettering University. He looks forward to a career in engineering and continuing to give back to his community.

An Everyday Hero: Monica HolmesRotary Student of the Month: Elizabeth DupuisOut of the past