Goodrich woman reaches the end of her American Idol run 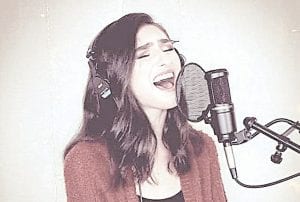 GOODRICH — Genavieve Linkowski has improved a great deal since her first appearance on “American Idol” two years ago – enough to make it to the final judgment round in Hawaii, where she came up short of moving on to the top 20.

Linkowski, 23, of Goodrich, gave an emotional performance of Lauren Daigle’s “You Say” on Sunday night’s show. She was cut right before this round in 2018. Linkowski felt she was better prepared this time after working with a vocal coach.

She’s also grown through a family tragedy, which she has shared with “American Idol” fans. Her sister, Corinn, who was by her side throughout her time on the show in 2018, died in a car crash last year.

“I’m singing “You Say” by Lauren Daigle,” Linkowski said before she took the stage in Hawaii. “It just means a lot to me. When my sister passed away, I felt very much that I was not enough because she was by my side since she was born, and it was just this whole overwhelming sense of I can’t do this anymore.”

After her performance, she met up with judges Luke Bryan, Katy Perry and Lionel Richie for their critiques.

“We’ve seen you grow tremendously,” Bryan said. “You have had tragedies and challenges within your family. I know that’s been very, very tough on you, and you have stepped up and grown a lot from the girl we saw in season one. You had magic things in your voice that really, really stood out, and you came back this year. We could tell that you worked, and those things were even better. Each round of this competition we’ve seen that.

“Last night, for some reason I didn’t feel a big connection,” Bryan continued. “It didn’t feel like we were getting that connectivity thing that we need as judges, and it’s to the point in the competition that you almost have to deliver that every night. You can leave here with so much talent, so much promise and keep chipping away at it. I’m sorry to tell you you’re not going through to the next round.”

“You seriously played a huge part in my growth. Thank you guys so much,” Linkowski said.

She hugged the judges, then broke the news to her family.

Up to this point in the season, each show has been pre-recorded. The live shows with the 20 finalists will be postponed for now due to the coronavirus pandemic.