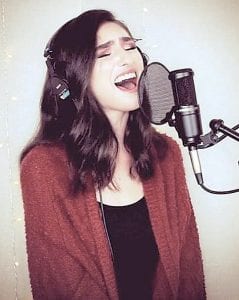 GOODRICH — A Goodrich woman is getting a second chance to wow the judges on the reality show singing competition “American Idol.”

Genavieve Linkowski, 21, announced in a YouTube video last week that the show contacted her to audition for the new season that begins airing Feb. 16 on ABC.

“I have once again auditioned for ‘American Idol,’ ” Linkowski said. “It’s not something that I knew I would do again, but one day I got a call, and I prayed over it, I thought about it, I talked to my parents. I talked to a lot of people. … So I accepted the invitation, and here I am.”

The daughter of Craig and Tamara Linkowski, she gained a following not only for her talent, but also for her story. Her mother suffered heart failure when the singer was just 12 years old, and as the oldest of 10 children, Linkowski had to care for and help home school her younger siblings.

Her mother recovered, and in 2018 family members and friends supported Linkowski during her audition for “American Idol.” She impressed judges Lionel Ritchie, Katy Perry and Luke Bryan in Nashville with her performance of Jason Mraz’s “I Won’t Give Up” and earned the trip to Hollywood.

Linkowski didn’t make it past the first round, and in February 2019, tragedy struck the family again. Linkowski’s 18-year-old sister, Corinn, lost control of her car on an icy M-15 near Goodrich, slid into the oncoming lane and was hit by a pickup truck. She died a few days later on Feb. 17, 2019.

The sisters were very close and sang together on their Haven Avenue YouTube channel. They were even being considered as a duet for the NBC show “America’s Got Talent.”

“I kind of just came to the conclusion that this is just another opportunity for God’s light to shine, for my sister’s light to shine, and for me to just share my story,” Linkowski said. “If I get to do that, I’m all in. If I get to point others to Jesus, then that is what I’m all about.”

Linkowski mentioned in her video that there may be an album in her future, but no specific details are available. Her publicist, Michaela Zukowski, said the show has not yet determined when the episode in which Linkowski first appears will air.