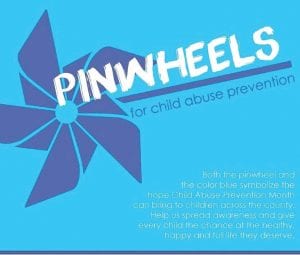 Supporters of a countywide Pinwheels campaign displayed this emblem in April, to raise awareness and funds to prevent child abuse.

FLINT TWP. — Goodwill Industries of Mid-Michigan recently reported that thanks to the generosity of donors a the Flint Township and Burton stores, the Pinwheels for Child Abuse Prevention campaign in a $276 donation to Whaley’s Children Center.

The paper pinwheels were sold for $1 each and also used as a symbol to spread the word about preventing child abuse in Genesee County. — R.S.