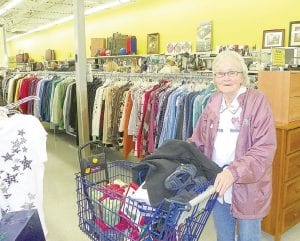 Barbara Smith of Flushing and her husband was one of the first customers in line Saturday morning.

FLINT TWP. — Barbara Smith, 80, of Flushing and her husband rose at 6:30 Saturday morning and were among about 20 early-bird shoppers, including one from Birch Run, who stood out in the rain waiting for the 9 a.m. opening of the new Goodwill store at 4340 Miller Road.

It’s Goodwill first and only store on the west side of Genesee County. Smith was a regular at the Burton location being replaced by this new store but is happy to shop for bargains closer to home.

Smith said she’s been shopping at Goodwill longer than she can remember.

“We know most of the employees from Bristol Road,’’ she said of the new store’s personnel who relocated from the closed store.

Her familiarity with and willingness to follow the store is a testimony to the growing draw of resale stores. Smith said she also shops regularly at a nearby Salvation Army store that opened about 15 months ago in Flint Township.

The Goodwill store is in a highly visible spot adjacent to David’s Bridal shop and next door to the south entrance to the Genesee Valley shopping center.

“It’s a tremendous opportunity for Goodwill,’’ said Gary Rubelman, the store general manager. He noted that 25 percent of store merchandise is new goods.

Claude High, chairman of the Goodwill Board of Directors, who did Burton, where the lease was expiring, happened in a short window of time – about three months.

“It’s been a tremendous amount of work,’’ Thompson said of the brightlypainted, reorganized store that offers fitting rooms, a Goodwill Optical store, ample sorting and storage room and more.

Thompson said it was opportune for a store of its size and location to be found and available just as the Burton store’s lease was ending.

Jet Kilmer, president of the Grand Blanc Chamber of Commerce, was on hand to lend her support. Goodwill is a member of all local chambers which all network to support each other, she said.

Kilmer congratulated Goodwill on its growth and expressed satisfaction to see a vacant business filled.

Starting opening day and for the rest of this week, customers can register to win one of 10 $20 gift certificates being given away as an opening promotion. Winners will be notified after a random drawing on Sunday, Rubelman said.

He also said the store’s color-coded markdown system would be suspended during the first week of sales. The first half-off color day will start May 22, he said.