GORILLA (GLASS) IN THE ROOM 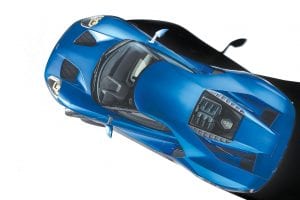 What started as a lightweight concept technology is about to become reality for Ford GT customers when the all-new supercar debuts the Corning Gorilla Glass hybrid windshield – a tough, durable, scratch-resistant window that is about 30 percent lighter than traditional glass.

Developed by Ford and Corning, Gorilla Glass hybrid window will be used on both the windshield and rear engine cover of Ford GT, contributing to enhanced vehicle handling, improved fuel efficiency and reduced risk of glass damage.

“Gorilla Glass hybrid is a great example of how Ford works with suppliers to innovate in every area of our business,” said Hau Thai-Tang, Ford group vice president, Global Purchasing.

When tasked with developing lightweight and advanced material vehicle applications, the Ford team approached Corning, a recognized leader in materials science that introduced light and durable Gorilla Glass to the consumer electronics market in 2007. 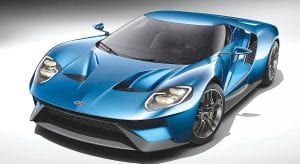 Once the technology was studied for Ford’s supercar concept, the team realized there were real-world applications for the new hybrid glass. A small, dedicated group comprised of purchasing and engineering employees from Ford and Corning fasttracked the technology toward rapid introduction. Within four months, they were seeking program approval.

A traditional automotive laminated windshield consists of two layers of glass sandwiched around a clear, thermoplastic interlayer binding agent. Originally introduced in America by Henry Ford, the technology has been used in the auto industry for nearly a century.

The new hybrid glass uses a multilayer approach – a pane of toughened automotive-grade formed hybrid acts as the strengthened inner layer, an advanced noise-absorbing thermoplastic interlayer is in the center, and an annealed glass serves as the outer layer. The result is a windshield and rear engine cover approximately 32 percent lighter than competitive vehicles. 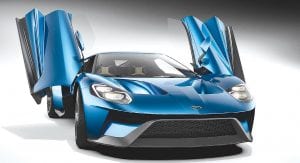 Gorilla Glass hybrid windshield is thinner than traditional laminate glass, and will improve Ford GT handling by lowering the vehicle’s center of gravity

The new Gorilla Glass hybrid window laminate is approximately 25 percent to 50 percent thinner, and has equal to, or greater strength than traditional laminate.

The new technology was tested over stone and in rough road conditions, and had to endure specific projectile, rollover and wind tunnel testing.

The reduced weight of the windshield, engine cover and bulkhead glass on Ford GT positively impacts acceleration, fuel economy and braking performance. Perhaps most important is the benefit on handling – removing the weight of glass high in the construction of the vehicle lowers the center of gravity and contributes to the car’s agility.