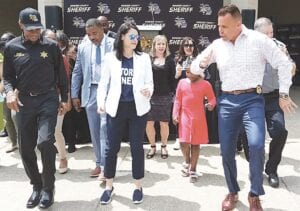 FLINT — They waited in a long, long line in the heat, many for two hours or longer. More than 700 people waited for the chance at a fresh start, a clean slate, a do-over.

Nessel said the expungement fairs exemplify the “commitment to bring government to a place where we’re actually working for the people of this state again.”

“We want to bring the people back in government,” Nessel said. “We want to have a government that actually works for you.”

“Today marks a day in history where the lives of 718 people will be … restored,” said Swanson. “It is an honor, as sheriff of Genesee County, to host this on the front lawn of a correctional facility.”

During her 2018 campaign, Whitmer made expungement for marijuana convictions one of her key priorities. Upon taking office, Whitmer worked with the Republican-majority legislature to pass Clean Slate legislation that will help thousands of Michiganders gain employment, housing and education.

She called the legislation “a game-changer for people seeking opportunities … so they can take care of their families and get ahead in this great state we all call home.”

“Clean Slate legislation is crucial for Michiganders who are seeking opportunities for employment, housing, and more,” she said. “Expungement is an opportunity to grow our workforce and expand access to job training and education for so many people. Let’s recommit ourselves to empowering every Michigander to pursue their potential as we emerge from the pandemic and turbocharge our economic recovery.”

Clearing a criminal offense has been “too narrow, too difficult and too expensive for the overwhelming majority of Michiganders,” said Lt. Gov. Garlin Gilchrist.

Expungement will allow people to state that they have not been convicted of the expunged crime on applications for public benefits, housing or employment.

Congressman Dan Kildee, a Flint native, said the city has a “long history of seeking justice.”

“Justice comes in many forms,” Kildee said. “It comes in holding people accountable for their mistakes, but also in a form of ultimately making it right. One way to make it right is to give people a chance to move on. The folks who are lined up here today are here because they’ve acknowledged a mistake in their past and they’re ready to contribute everything they have, everything they can, to the goodness of our society.

Michiganders are encouraged to check their eligibility and apply to participate in an expungement fair.