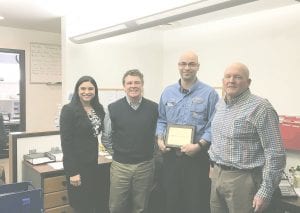 Adam Niestuchowski, Service Supervisor at Goyette Mechanical in Davison, received the award after completing the “Effective Communications and Human Relations” course held at the Genesys Conference Center in Grand Blanc.

The award is voted upon by the all the participants in the 12-week course and is given to the person who best exemplified the standards, qualities, and principles on which the Dale Carnegie program is based. Adam and his wife, Amanda, are residents of Swartz Creek where they are raising their two young girls.

“I was so proud of Adam and he truly deserved this award,” said Sarah Villanueva-Potbury, course instructor and Dale Carnegie business consultant “He really came into his own and showed tremendous growth each week of the course,” she said.

Curt LaLonde, General Manager at Goyette Mechanical, agreed. “Adam is a valued member of the Goyette team and we have definitely seen an increased confidence level in his daily interactions with his co-workers and our customers,” he said.

Goyette Mechanical is a Flint-based company that was started in 1928. Today, it has annual sales of over $45 million and has assembled a team of industry professionals in the mechanical, electrical and piping trades.