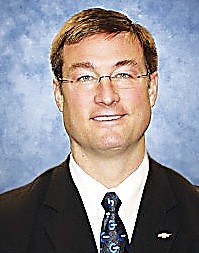 DAVISON — It’s official. General Motors has signed off on the purchase of most of the Hank Graff dealerships by Graff’s son, Chris Graff.

Chris Graff, 42, said that while he’s owned the Davison dealership for some time now, he had gradually been working to assume ownership over the rest of the car sales empire built by his father and started by his family nearly 100 years ago.

“It’s business as usual,” said Chris Graff. “It’ll always be that way. My dad could be more retired, but he’s had a continuing interest. He loves the business and he loves being engaged with the customers.”

The younger Graff said he envisions his father continuing to represent the business in commercials, and on radio advertisements since he is known by so many as the face of the dealership chain.

Chris Graff said he hired on with the family business in

1993 and he’s held many jobs at the dealership over the years. He is a Michigan State graduate and is married to wife Jennifer.

The couple has two children and they live in the Clarkston area.

One summer, he said, he remembers working almost every position in the office at Graff Chevrolet while he was covering the staff there for vacations. It gave him valuable insight as to who did what and why.

“You have to walk in another man’s shoes to understand what they do,” he said.

Graff said he has owned the Davison dealership for some time now. He said a deal was reached in May 2012 on the Durand dealership and in December for the Bay City, Sandusky and Gladwin Graff outlets.