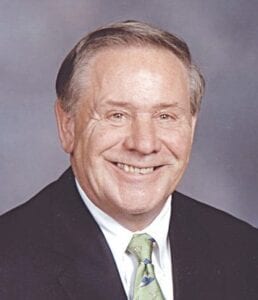 GRAND BLANC — On Friday, the Grand Blanc community will say its final farewells to William F. “Bill” Delaney, a man who helped shape Grand Blanc Township in the 1970s, ‘80s and ‘90s.

According to an obituary posted on the funeral home website, Delaney’s leadership during his first 10 years in office helped bring about the construction of the township hall, Bicentennial Park and the sewer system.

In his second, eight years in office, he led the township through the construction of such landmark economic projects as Genesys and General Motors. His “crowning achievement” was the elimination of the “deadly” s-curve on Cook Road, his obituary states.

In addition to service in the Grand Blanc community, Delaney served as chairman of the Genesee District Library Board, and president of the Genesee County Economic Development Corporation, among others. He was active in his church, First Presbyterian, in Flint.

Delaney held a bachelor of science degree from Western Michigan University and worked at Buick. He and his wife, Mary, also founded Warwick Pointe Academy. — L.R.