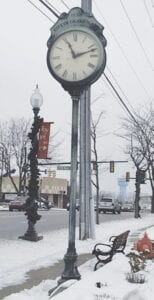 GRAND BLANC — A sentimental piece of Grand Blanc history – the clock in the plaza – may be replaced in the coming year.

“It’s pretty dinged up,” said City Manager Wendy Jean- Buhrer. “It hasn’t kept proper time for a while, and we do get calls on it. It is a central focal point in the city.”

The family of former mayor Paul Galuszka, who served as chief elected official from 1989 to 1992, donated the clock per Galuszka’s wishes, according to local history.

City officials say it has great sentimental value for many longtime city residents.

When the City Council meets in January, they will consider all of the options, from refurbishing the mechanism to replacing the whole thing.

The costs are likely to range from $9,200 to $21,000, depending on which option the council chooses. The funds are available in the Parks and Recreation budget.

Even if council elects to replace the timepiece with something that will better withstand the elements, the dedication plaque will remain at the base in honor of the Galuszka family’s gift.

The old clock could find a new home at the Heritage Museum, city officials said.

If council opts to invest in a new clock, they are considering changing the color scheme to black with red accents to carry out the city’s brand image. The current clock is green, which matches the streetlights.