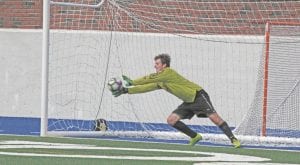 Carman-Ainsworth goalkeeper Spencer Fiewig lays out to make the save.

GRAND BLANC – Carman- Ainsworth’s boys’ soccer season ended in the district semifinal last Thursday on a soggy field against host Grand Blanc with an 8-0 shutout loss. The Bobcats (12-5-5) took a 6-0 lead into the half and added another pair of goals in the second stanza to finish the game off. The Cavs finished the season at 1-8.

Austin Hobbs and Mark Zachrison led the way with two goals apiece while Muaz Asperger, Max Whitmore, Conor Dellorso and Jacob Tali each scored once. Dobbs and Zachrison also had two assists apiece and Brandon Dellaposta, Sammy Saeed and Muhamed Abdalla-Ali each recorded a helper of their own. – B.P.