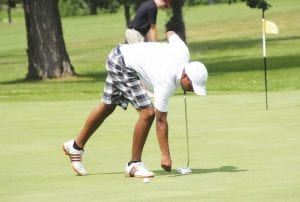 Carman-Ainsworth’s Haywood Petty repairs a ball mark on the 18th green during Monday’s first round at Flint Elks Club. Petty made the cut for the second round.

GRAND BLANC – Alex Finsterwald shook off the bad memories of last year and a storm-interrupted sleep this year to win the Mancour Cup golf tournament this week at Flint Elks Club.

The Grand Blanc senior shot par-72 on Monday and 75 on a windy Tuesday to finish at 147 and beat Swartz Creek graduate Jack Weller by one stroke in the first major tournament of the Flint Junior Golf Association season.

Defending champion Ben Zyber of Swartz Creek was three shots back at 150, tied with Jordan Harris of Grand Blanc, and Creek’s Mike Kelley carded 151 for fifth place in the 18-player final field.

Finsterwald held the first-round lead Monday, much like he did last year when he wound up losing by three shots to Zyber. He put that experience behind him and focused on the task at hand, even through the crackling thunderstorm that woke him up Monday night.

“I got out here bright and early and worked on nothing but four-foot putts,” he said. “I missed a couple of four-footers last year that cost me the tournament, so I was on the putting green for about 25 minutes, making sure I got those down.

“And I ended up making a four-footer to win it.”

Finsterwald knew he needed to make the final putt because playing partner Harris tipped him off that Weller had shot 72.

It helped that the decisive putt was right in his comfort zone.

“Those little ones that go uphill and break to the left are my favorite,” he said.

“That’s a very big deal for me,” he said. “I’m still looking at colleges, hopefully maybe get a scholarship to play golf. Playing in the Randy Wise should help get my name out there and better my chances.”

Kearsley’s Ryan Fulton tied for 12th at 158 with Davison grad Andrea Richards, who was the only girl playing in the final round. Carman-Ainsworth’s Haywood Petty made the cut with a 79 Monday but struggled to a 93 Tuesday for a 172 total.

The next two legs of the FJGA’s triple crown are the Mallon Cup Challenge next Monday at Warwick Hills Golf and Country Club and the Henrickson Award on July 14 at Atlas Valley Country Club.