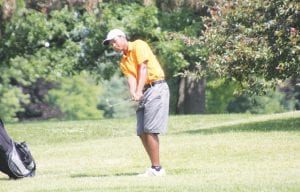 ATLAS TWP. – Jordan Harris needed a scorecard playoff to win his championship and had to come back hours later to pick up his plaque.

Kristen Wolfe could have just left hers on the wall at home.

Harris, a Grand Blanc graduate, shot 2-over-par 74 to tie Nick Winiarski for first place in the Flint Junior Golf Association event, a deadlock that normally would have necessitated a playoff for the plaque. But Harris had to leave immediately after his round to work an afternoon tournament in Detroit, so the title was decided on a scorecard playoff. Harris won it on the first handicap hole,scoringa5toWiniarski’s7.

Harris, a caddie at Warwick Hills Golf and Country Club, was obligated to work the Chick Evans Caddie Scholarship charity tournament at Detroit Golf Club because he was a recipient last March of a full-ride scholarship to attend Michigan State University. He worked a par-3 hole, watching for holes-in-one.

While he was gone, Winiarski tied his score.

“I had no idea,” said Harris, who had a three-stroke lead when he left. “I found out later that night when I went to pick up the trophy.”

Harris had three bogeys and a double-bogey on the front nine but rallied with three birdies on the back for his 74.

Wolfe, meanwhile, cruised to the girls’ championship for the second straight year. The Grand Blanc resident, who just graduated from Flint Powers Catholic and will play on the newly revived women’s golf team at Central Michigan, shot 75 to beat Flushing’s Chelsea Thomas by five strokes.

“I just wanted to play well so I could hang it back up on the wall at my house,” Wolfe said of the Henrickson Award, a traveling plaque that winners keep for a year.

Wolfe, who normally shoots in the high 70s, had one birdie and lipped out another birdie putt on the last hole.

“The greens were a little tricky,” she said. “Some of them were a little bit faster than the others. But that’s golf. You just have to adjust to it.”

The third leg of the FJGA’s triple crown will be played next Monday when the Mallon Cup is contested at Flint Golf Club.