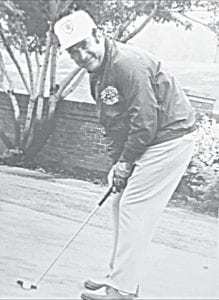 GRAND BLANC — If there is a definition of legacy, perhaps it could be said that Louis B. Coriasso, M.D., a lifelong resident and area physician, was that definition.

Coriasso’s son David, shared that his father was definitely the center of their universe.

David, a Davison optometrist, was very proud of his father, and remembered especially about 20 years ago when Louis underwent open heart surgery 1996 at the age of 69, but continued to practice. David nominated him for the Community Home Health Hospice ‘Honor Your Doctor award, which he won.

The nomination talked about many times when his father wasn’t at home for family dinners and other events due to his medical practice but David remembered most his dedication his patients and improving lives via his work in the Genesee County medical Community.

Coriasso was born April 22, 1928 and passed away peacefully in his home on Sept. 24, 2018 at age 90, surrounded by his loving family. He was born in Walsenburg, Colorado on April 22, 1928 to proud Italian immigrants, the late Francesco Coriasso from Leini, Italy and Adele (ne Guigli) Coriasso from Modena, Italy. Raised in a loving Catholic home in a small Rocky Mountain coal town, Lou graduated from Walsenburg High School at the age of 16. He went on to attend the University of Colorado in Boulder for two years before serving his country in the U.S. Navy.

While stationed in Washington D.C., Lou met the love of his life, Margaret Ann O’Leary. The two were married on March 19, 1950 at St. Ann’s Church in Washington D.C. Following his service in the Navy, Lou returned to his home state where he completed his undergraduate degree in 1951 and began medical school at the University of Colorado School of Medicine.

Upon his graduation in 1955, Lou relocated his family to Flint, Michigan where he and his dear college friend, Dr. Robert (Bob) James, established a family medical practice in the thriving community. Lou provided compassionate care for over 55 years, practicing “old school” family medicine, from cradle to grave, for thousands of families.

In 1967, Dr. Lou moved his family to the Warwick Hills subdivision in Grand Blanc, Michigan where, residing along the first fairway, he took up the game of golf at the age of 39. This became a passion that he shared with friends and family throughout his life. An accomplished golfer, Lou was a two-time winner of the prestigious Pro-Am tournament during the Buick Open, numerous Men’s Invitational and Club events, carded multiple holes-in-one, and shot his age several times, including a remarkable 83 in the year of his 83rd birthday. Lou proudly served as president of Warwick Hills Country Club in 1973 and 1974 and remained a familiar face and long serving, active member for over 50 years.

Dr. Coriasso was made an Honorary Member of Warwick Hills in 2018. He served on many boards and committees locally to promote better access to health care and the well-being of the greater Flint community. He was a past president of the Genesee County Medical Association and an architect of health care services for Genesee County through his participation and leadership in several organizations, including the AMA, American Academy of Family Practice, Michigan State Medical Society, St. Joseph’s Hospital and Genesys Regional Medical Center. Dr. Coriasso felt a responsibility to give back to the community and in his later years, volunteered at the free clinic in Burton, donating his time and resources to those in need. He was kind, understanding, and showed respect to his patients, all of whom he felt privileged to treat. Family was certainly the cornerstone and greatest passion of Lou’s life. He was an exemplary role model for his family as he demonstrated care for others, kindness, humility, and love. His endearing love was never more evident than in his recent years as he continued to care for his lovely wife, Ann. Lou’s pride for his family was immense, and the success and work ethic that he embodied is carried forward in his children and grandchildren, who have grown to be doctors, optometrists, nurses, parents, business leaders, accomplished high school/collegiate athletes and more. Lou is survived by his wife of 68 years, Margaret Ann Coriasso, and their five children, Kathleen (Thomas) Gould, Louis (Stacy) Coriasso Jr., Ronald (Kathryn) Coriasso, Julie (Greg) Swoyer, David (Linda) Coriasso and loving sister Marlene (James) Smith. He will also be lovingly remembered by his 15 grandchildren.