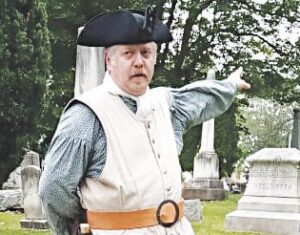 GRAND BLANC TWP. — It was with a pioneer spirit that the first settlers began to carve the Grand Blanc community out of the wilderness. On Saturday, Aug. 7, the “spirits” of some of those pioneers retold the stories of their legacies.

The event was the inaugural Ghost Walk at the Perry-McFarland Cemetery sponsored by the Grand Blanc Historic District Commission. Commission Secretary Stephanie Popoff estimates that it took more than 10,000 volunteer hours to prepare for the Ghost Walk.

Grand Blanc Township residents Ben and Lindsay Clevenger were among the volunteers who dressed in period attire and portrayed historical figures. The couple channeled the spirits of Caleb Thompson and his wife, Clarinda Perry Thompson.

Lindsay Clevenger said she enjoys history and sharing that knowledge with others.

“I always thought it would be fun to live back in those times,” she said. “I’m getting a little taste of that now.” 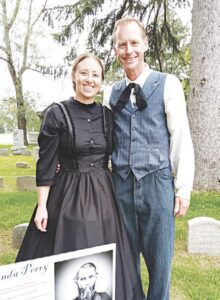 Ben and Lindsay Clevenger portrayed the ghosts of Caleb and Clarinda Thompson, two of the early settlers who helped shape the Grand Blanc community. Photo by Lania Rocha

She also likes learning about the heritage of the town founders. It’s interesting to know about the people after whom the streets and landmarks are named, she said.

In preparing for his role as Caleb Thompson, Ben Clevenger said he learned a lot about local history and the contributions of the settlers.

“We live by Saginaw and McCandlish roads,” he said. “The people we’re portraying, that was their land. I found that interesting. And, the family connections among the settlers are interesting.”

Volunteer Aaron Wiles portrayed Nathan Burpee, a farmer and Revolutionary War soldier who moved from Massachusetts to the Atlas area around 1830.

“So far, I’ve had a lot of positive feedback,” Wiles said.

The visitors seemed genuinely interested in learning about the local heritage, and asked a lot of good questions, he said.

One of those visitors was Randy Kilgore.

“It was excellent,” Kilgore said. “How many times, in the 40 years I’ve lived here, have I driven past these places and never knew the history.”

He said he stopped at the cemetery once and looked at the tombstones, but the names didn’t mean much until he heard the stories of the people laid to rest beneath those grounds.

“It was very informative,” Kilgore said. “I just wish my grandparents and parents were still alive, or I had been smart enough when they were, to ask them all the questions I have.”

Other founders portrayed during the Ghost Walk were Edmund and Mercy Perry who started the Perry Settlement, and Simeon and Sarah Perry, on whose land the Historic Perry House now stands.

“It was originally a log cabin, built around 1824 or ’26,” Popoff explained. “It all started with that cabin, and eventually built throughout Perry’s Settlement.”

Half of the cemetery land was once Perry family land, and half of it was McFarland land, Popoff said. The burial ground originally was called The Union Cemetery.

The sign indicates that the cemetery was established in 1869, but Popoff said that may be when the name changed. The first burials took place in 1834 and 1835, when Simeon and Sarah Perry laid to rest their twins, Joseph and Mary. Born in 1834, Joseph died that year (although his grave marker said 1843), and Mary the following year.

Next up for the Historic District Commission is Pioneer Days in October.