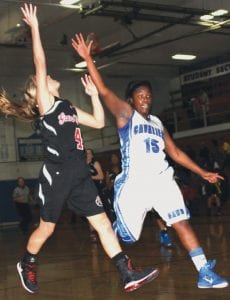 Grand Blanc’s Kendra Fruend is defended by Carman-Ainsworth’s Kapri Thompson in the season opener on Tuesday.

FLINT TOWNSHIP— The Lady Cavaliers held the lead at halftime, 33-24. Smart fundamentals and good free-throw shooting helped Grand Blanc climb right back into it, and eventually take victory with a 57-51 comeback win.

Although the Cavs assumed control in the first half, Grand Blanc continued to grind, pulling itself right back into the game. Grand Blanc trailed, 46-34, with 1:34 remaining in the third quarter, but still clawed its way back in. The Bobcats went 11-of-14 from the line in the final frame, and outscored Carman-Ainsworth, 18-5. Grand Blanc took their first lead of the game on one-and-one set of free throws, as Kara Puidokas put the Bobcats on top, 51-49.

Junior guard Ashley Hall led the Lady Cavaliers with 16 points, while senior guard Kapri Thompson put in 12 of her own, as well as four rebounds. Jasmine Jones contributed with three assists and nine points for the Cavs.

“This was a great team win,” said Grand Blanc coach Megan Noll. “What a way to test our en-of-game poise in the first game of the season. We didn’t panic and we spread the ball around very well. The girls did a great job of breaking their press. As we cleaned up turnovers and our free throw shooting throughout the entire game, I’m very excited to see what this team is capable of doing.” 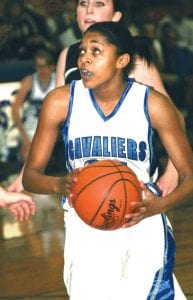 Carman-Ainsworth returns to the court on Tuesday traveling to Swartz Creek to take on the Dragons.