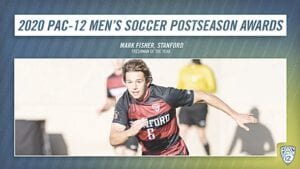 PALO ALTO, CA. — Former Grand Blanc soccer standout Mark Fisher has been named the PAC-12 Freshman of the Year for 2020. Fisher, a redshirt freshman midfielder for Stanford University’s men’s soccer team, has started every match in his debut season for the Cardinal. He ranks fourth on the team with three assists and has provided a steady presence in the midfield for a Stanford team that led the PAC-12 in goalsagainst average (0.65), ranked second in goals per game (2.42) and tied for the nation’s third-best goal differential (+21). He is the fourth Stanford player to be named Freshman of the Year, joining Ousseni Bouda (2019), Aaron Kovar (2012) and Bobby Warshaw (2007).

Fisher graduated from Grand Blanc in 2019. He played soccer for Grand Blanc High School as a freshman and was named all-conference, all-district and all-region. Outside GBHS, Fisher played for the Michigan Wolves Soccer Club (2016-19) and Waza FC (2015-16), captaining Waza a freshman and Wolves as a sophomore (2016-17) and senior (2018-19).