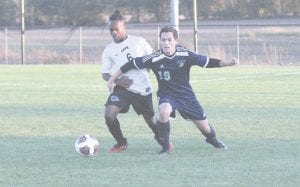 Carman-Ainsworth’s Alex Williams tries to get around a Lapeer opponent in the district opener on Oct. 17.

Carman-Ainsworth was knocked out by Lapeer in the opening round. After Lapeer defeated the Cavaliers 3-0, Lapeer was topped by Grand Blanc 2-0, after the Bobcats had previously beaten Saginaw Arthur Hill 14-0 in the semis.

Swartz Creek advanced to the final after defeating Flushing 2-0 in the opener and Davison, 2-0 in the semis.