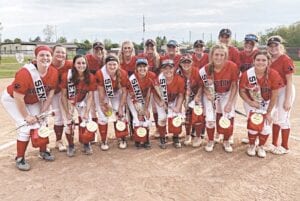 In the opening game, Grand Blanc jumped out in front 1-0 in the first inning with a sacrifice fly from Sydney Long. Long, Rebecca Oetting and Summer Brady all drove in runs in the fourth inning to tack on five more runs for the Lady Bobcats, who cruised from that point on. Kendall Klochack led Grand Blanc on the mound, going seven innings and allowing three hits and one run while striking out 12 batters and walking one. Grand Blanc had five stolen bases, including three from Annabelle Morningstar.

In Game Two, Kendall Klochack led the way on offense for Grand Blanc, going 4-4 at the plate with two doubles and two singles. Grand Blanc got on the board in the first inning with Klochack’s first double, which drove in a run. Detroit Country Day evened the score in the top of the second inning when Lola Bagby singled, scoring one run. But the Lady Bobcats pulled away for good with two runs in the third inning, then added four more runs in the fifth inning. Audrey Kranz led the scoring blitz with a triple and Summer Brady recorded her first home run of the season in the fifth.