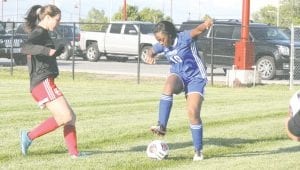 Carman-Ainsworth’s Aja Williams uses her footwork to get past a Swartz Creek opponent during the district opener.

DAVISON – Grand Blanc capped off a great season last Friday when it took down an undefeated Swartz Creek team for the district title, winning 1-0. The would-be winning goal came early in the second half.

Swartz Creek had defeated Carman-Ainsworth 9-1 in last week’s district opener. Destinee Lester had the only goal for the Lady Cavs when she made good on a penalty kick in the first half. Swartz Creek led 5-1 at halftime and sealed the win with four more goals in the second half. In the semifinal, Creek edged out host Davison 2-1 to advance to the title game.

In the other end of the bracket, Grand Blanc knocked out Flushing 4-0 in the first round and tackled Lapeer with a 3-0 shutout in Wednesday’s semifinal. The Bobcats went head-to-head with Midland in the regional semifinal on Tuesday at Grand Blanc. The winner will play either Walled Lake Northern or Utica Eisenhower for the regional title and a shot at a state title.