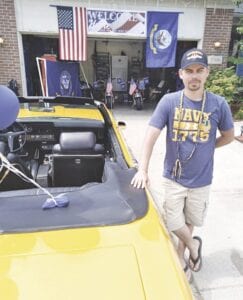 GRAND BLANC TWP. — Retired Chief Petty Officer William J. (Joe) Goetz III expected his family to get together and have a backyard barbecue to celebrate his homecoming and retirement after 20 years of service in the United States Navy.

Instead, he returned home to a parade with a police and fire department escort, a ceremony, and neighbors lining the streets of the Sandalwood subdivision to wish him well.

“There are so many different words to describe how this feels,” Goetz said amid the revelry Thursday, Aug. 6. “I am humbled. Honored. Embarrassed.”

About five years ago, Goetz and his wife, Joanna, discussed what they would do and where they would go after he retired.

“This makes me happy that I came home,” he said.

He plans to take a little time off, then, “who knows,” he said.

“We’ll start looking for a house in Genesee County, then on to the rest of our lives,” Goetz said.

Goetz is a third-generation Navy man, having followed in the footsteps of his grandfather on his mother’s side, and his dad, William J. (Joe) Goetz II. He officially retired July 24.

According to a statement written by Joe Goetz II, COVID-19 and a family member’s fight against cancer sunk the retirement ceremony.

“His US Navy ‘End of Tour’ award was given to him by a duty administrative person as an afterthought during his last day of checking out of his last duty station,” the elder Goetz wrote. “Unfortunately, this is how he began the rest of his life after he and his family (including daughter Penelope) sacrificed liberties we all take for granted.

“As his father … and as a Navy retired command master chief, I felt the need and duty to do something to recognize his personal achievement and dedication to his country … a little more celebration.”

In addition, Goetz received a 1969 Pontiac Lemans convertible as a retirement gift from his family.

A ceremony prior to the parade included the presentation of Goetz’s Navy Commendation medal, with a veteran reading the citation and his father pinning the medal to his chest.

“My motivation to make this right for him, as my son and as a United States sailor, is driven by this: 14 years ago, during my ceremony, my son, while on active duty, was in my ceremony executing one of the major speaking parts as a young sailor with about six years under his belt,” the senior Goetz wrote.