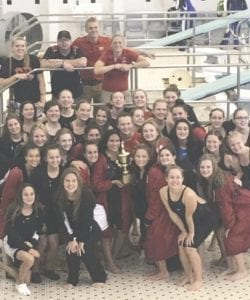 The Grand Blanc swim and dive team poses with its trophy after the County Championship meet at Fenton Saturday.

FENTON – The Grand Blanc swim team won its 11th consecutive Genesee County Championship on Saturday. The Bobcats finished with 598.5 points in first overall, followed by Fenton with 458 and Powers Catholic in third place with 222.

Fenton took the lead right out of the gate with a first-place finish in the 200 medley relay, but Grand Blanc’s team of Skylar Clark, Sara Andrykovich, Megan Sieloff and Hallie Pruitte finished in second place in 1:56.89. The Bobcats kept within striking distance during the 200 free. Sieloff finished in 2:03.47 and second place. Aditi Desai was third in 2:04.96 and Clark was fourth in 2:07.

Fenton regained the lead as a team after the diving competition, even though Grand Blanc’s Carolyn Hagler won with 394.9 points. The Bobcats battled back with a victory by less than one second in the 100 butterfly from Rodgers in 1:00.96. Pruitte then finished third in the 100 free in 57.4. Graham and Schultz were right behind her in fourth and fifth, swimming 1:00.06 and 1:00.14 respectively.

Pruitte, Sieloff, Desai and Rogers capped off their Genesee County Championship by winning the 400 freestyle relay in 3:47.29.

The Bobcats also swam in a tri-meet with Fenton and Powers Catholic on Tuesday night, but scores were not reported in time for press.

Grand Blanc hits the pool again tonight in a dual meet at Novi at 6:30 p.m.