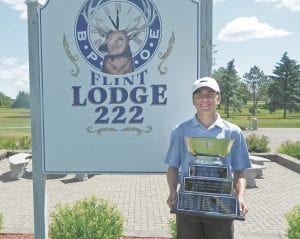 Nick Bruett of Grand Blanc poses with his trophy after winning the FJGA’s 2018 Mancour Cup Tuesday at the Flint Elks Club. Photo by Loyd Walter

GRAND BLANC – Golfers in the Jack Nicklaus group of the Flint Jr. Golf Association (FJGA) traveled to the Flint Elks Club Monday and Tuesday for a two-day tournament to vie for the FJGA’s coveted Mancour Cup. Golfers needed to card at least an 81 in the opening round to qualify for the second day of play. In total, 13 of the 63 golfers qualified for Tuesday’s final round, which saw Grand Blanc’s Nick Bruett finish on top to take home the hardware.

During Monday’s opening round, last year’s Mancour Cup winner, Trent Barth of Goodrich, finished the day with a 75 to tie for the lead along with Brendan Silpoch of Grand Blanc and Zach Limas. Bruett finished with a 77 to enter the second round two strokes off the lead.

During Tuesday’s second round, Barth and Bruett were tied for the lead up to the green on the 18th hole, where Barth two-putted and allowed Bruett to one-putt for the win. Bruett finished the tournament with a 77-75-152, while Barth finished in a close second with a 75-78-153.

Swartz Creek’s Cameron Beckwith carded scores of 80-77-157 for third and Silpoch, Ranveer Ajimal of Grand Blanc, Kamryn Johnston of Davison and Keegan Miller all finished tied for fourth with 161. Goodrich’s Ben Locey finished with a 162, Flushing’s Andrew Nestor and Swartz Creek’s Neeley Peterson finished with 163s and Limas carded a 168. Brook Herbstreit finished with a 174 and Davison’s Brooke Kalisz rounded out the top-13 with a 193.

With the win, Bruett gained an exemption to the AJGA Randy Wise Open August 20-23 at Spring Meadows Country Club in Linden.

This coming Monday, the Jack Nicklaus group travels to Spring Meadows for its fifth week of competition. For full tournament results and to view the upcoming schedule, visit www.fjga.org.