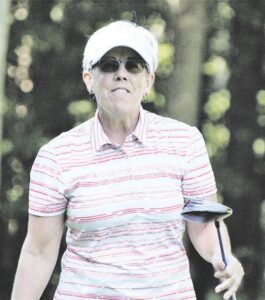 “Pretty much every day that ended in a y,” she said and laughed. “I don’t practice for hours, never have. I play a lot instead. It wasn’t great golf that I played this summer, but for me it was pretty darn steady.”

Delcamp, a GAM member through Flint Golf Club, led the senior women’s point list presented by Carl’s Golfland with 545 points, topping the Senior Women’s Player of the Year from the last six consecutive years, Julie Massa of Holt and Forest Akers Golf Courses, who had 540 points.

Shelly Weiss of Southfield, a GAM member through the Michigan Women’s Golf Association (MWGA), was runner-up in a playoff to Delcamp in the GAM Women’s Senior Championship and finished third with 295 points.

Delcamp called it a fun year and said it feels great to win the honor.

“I’ve never been a great player,” she said. “I played a little college golf (two years at Central Michigan University), then I took about 10 years away doing other things, a career, all that, like a lot of people. Then I came back to it and I’ve just been beating away at it. It’s probably more an obsession than anything else, but it feels good to do well and win something.”

Delcamp said while there are several senior women who can win tournaments Massa stands out.

“She has been the cream of the crop since she turned 50,” Delcamp said. “You know that if you are going to go out and do anything in Michigan golf you have to beat Julie. For the most part this year I was able to do that.”

It’s fun and making friends that inspires Delcamp to play and maintain her game at an elevated level.

“That’s really the big thing for me, and the GAM tournaments make that possible,” she said. “We owe a lot to the GAM for having tournaments for us to play in.”

She said her sudden-death playoff win over Shelly Weiss in the GAM Senior Women’s Championship was the top moment of the summer.

“I had not putted that well for two days and had to make a six, seven-footer to win,” she said. “By golly it went in. That felt great to pull that off.”

Hartmann called her one of the state’s most consistent players and noted she is not afraid to try things in her golf game.

“When you look at leaderboards with the Senior Women you don’t have to go down far to find Delcamp listed because she is always up there,” he said. “She earned her points this year in tournaments where she beat Julie (Massa), too. Everybody knows that’s not easy to do.

“She also has developed that sidesaddle putting style. It’s not for everyone, but it works for her. I give her credit. Some people might give up on competitive golf if they have trouble putting, but she is not afraid to try things like that and make them work.”