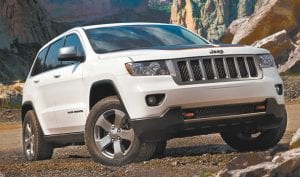 Nearly 800,000 people braved some of the coldest weather of the year to visit the North American International Auto Show this past week at Cobo Hall. Crowds rushed into Cobo throughout the week to view the latest and greatest that the automobile manufacturers had to offer. There were a myriad of displays from manufacturers from all around the world, but it seemed that crowds were very interested in the cars from the U.S. manufacturers. By watching the amount of people visiting the Chrysler area, it was clear that two Auto Show favorites from that manufacturer were the Grand Cherokee and Dodge Dart.

The Jeep Grand Cherokee was one of the stars of the Chrysler lineup. Sporting some changes both interior and exterior from last year’s model, the 2013 Grand Cherokee was a great source of pride for one of the assembly line workers who helps to build this four-wheeled beauty. William Stoffel, a veteran of the war in Afghanistan, works at the Jefferson Avenue assembly plant. He came to the show with family and friends to admire and take pride in the product that he helps to produce. 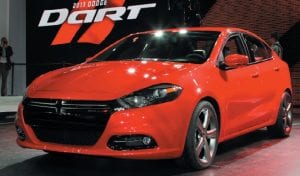 Stoffel was a great source of knowledge regarding this redesigned product from Chrysler, and it’s apparent that knowledge comes from the excitement of being part of producing a great product. One of the elements of the redesign he seemed to be most proud of was the new front end that helps to increase the air intake area for better engine cooling. Also, the new LED headlights were a new feature he was quick to point out, saying the LEDs were brighter than conventional headlights and are de- signed to last for the life of the vehicle. Stoffel was also extremely proud of the redesigns around the engine compartment which allow the driver easier access to the fuse box.

One of the other autos in the Dodge display area that attracted a lot of attention was the Dodge Dart. Many auto show attendees spent lots of time getting in and out of the different Dart vehicles on the floor, from the ST placed at the entry point to checking out the plush interior of the SXT model, and scoping out each vehicle’s bells and whistles. The real attention grabber, however, was the future Dart GT.

The bright red car was a standout in the Chrysler display. The new Dart GT will feature a 184 hp 2.4-liter Tigershark MultiAir 2 engine with six-speed manual, or available six-speed PowerTech automatic Auto Stick. Although the GT is not currently available, Erin W., product specialist, narrating the specifications of the future model, told many in the crowd that the car would be available in the second half of the second quarter of 2013.