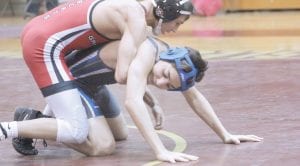 Carman-Ainsworth’s Omar Al Hallak works to break free from a Grand Blanc opponent at a quad at Davison on December 19. Photo by Joe Oster

MONTROSE – The Carman-Ainsworth wrestling team competed at the Montrose Holiday Duals at Montrose last Friday, losing 54-30 to Corunna and 78-3 to Tecumseh.

Carman-Ainsworth is at New Lothrop Saturday.