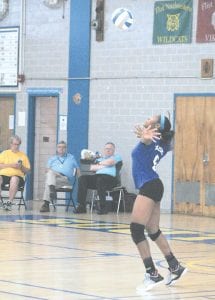 Diamond Lester, shown here serving last year, is back at outside hitter for her fourth varsity season. Photo by Brandon Pope

FLINT — The Carman-Ainsworth volleyball team finished eighth overall in the Saginaw Valley League in the regular season, but ended the year on a high note after tying for fifth in the conference tournament and eventually falling to St. John in district play.

Carman-Ainsworth lost two of its most important players to graduation in four-year defensive specialists Katie Speaks and Morgan Sherrer, who both shared the Libero position. Speaks is now playing volleyball for Mott Community College, and Sherrer attends Toledo University.

Thankfully, the Cavaliers boast a veteran-laden squad with seven seniors, including Diamond Lester, Angel Eubanks and Hannah Thurston, who will be playing at the varsity level for the fourth consecutive year. Seniors Destiny Johnson, Mary Dollinger, Aniya Harmon and junior Emily Carroll are back for the thirdstraight year. Senior Areyana Harrsion is also back, after making her varsity debut last season. Coach Barb Hurand hopes that the veterans will be able to impart some wisdom and leadership throughout the Carman-Ainsworth program.

“Our biggest challenge will be our mental game,” said Hurand, who is entering her 30th season coaching and 29th at Carman- Ainsworth. “We have to minimize our mental errors and make sure we are aggressive in everything we do.”

The Lady Cavs will be rounded out with a batch of newcomers in juniors Hannah Arnold, Sydney Johnson, Joselyn McBride and sophomore Sarah Roe.

Even with last year’s impressive showing at the SVL tournament, the Lady Cavs do not expect to stroll through conference play.

“Our Saginaw Valley South Conference is a tough one,” said Hurand. “There are a lot of great players in Genesee County and teams in our league and outside our league. Our goal is as high as everyone else’s and that is to win our league and then focus on the state tournament. We will work hard every day, striving to reach or pass our goals…We want to be aggressive. Always giving 110% every day in practice and in games defines success for any coach. Winning championships is the added bonus that comes from that work ethic. I believe in this group of girls. They’ve worked hard in the off season and they are very hungry.”