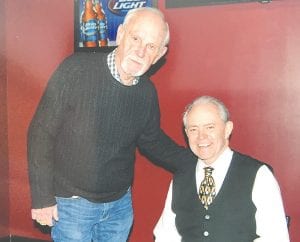 FLINT – A Hot Stove Night with former Detroit Tiger coach Jim Leyland on January 25 at Foutch’s Strike Zone very well may turn into an annual fundraiser to continue to improve Whaley and Broome Parks in Flint.

Drew Johnson, Greater Flint Baseball/Softball Association Commission, and LakeVille athletic director and varsity boys’ baseball coach, and board members reached out to Ron Myers, Tigers Director of Operations in Lakeland, Flor. to get a headliner for the fundraiser and much to Johnson’s surprise, was told Leyland would be honored to help.

“Ron Myers was born and raised in Flint and still makes Flint a priority in his life,” said Johnson. “The GFABSA board has a great relationship with Mr. Myers, so we contacted him about the possibility of getting someone from the Tigers organization to come into town for this type of fundraiser. Within about five days, Mr. Myers had lined up Jim Leyland for us! We are hopeful that we may be able to turn this into an annual fundraiser for our parks.”

“We have identified our priority list for the parks and will begin repairing our most urgent infrastructure need,” said Johnson. “The priority list includes items such as: replacing and repairing bleachers and also bringing them up to code, updating the electrical boxes within the parks, mainly focusing on the stadium lights, replacing the stadium lights at both parks, installing safety lighting around the concession/ entrance at Whaley Park, installing dugouts on the youth fields, erecting a new backstop at Broome Park, fixing roofs on the concession stands at both parks, among many other issues that need to be addressed. As the parks sit, we can host games for 3-5 more years, but if we do not start to address the infrastructure issues, the parks will not be able to be maintained after that time period.”

Lapeer and Genesee county high school baseball and softball teams use both parks for the annual Tom Cole Baseball Tournament, softball tournaments, and the youth pro- grams throughout the Greater Flint area call the parks home.

“The Detroit Tigers organization has been extremely helpful throughout this planning period,” stressed Johnson. “It is impossible to describe the impact they have had on our Flint Parks and Community by simply supporting this fundraiser. We are very grateful to the Detroit Tigers Organization, Ron Myers, and Jim Leyland.”

Johnson was blown away by Leyland’s presence, his interaction with the public and media and his ability to make everyone feel like Leyland was talking to them specifically.

“Jim Leyland is such a humble and passionate person,” Johnson shared. “To get the support from a person of his status is unbelievable. When he arrived at the venue, it was obvious that he truly wanted to make this event special for our community. He fielded interview questions from the media, took pictures with fans, and even signed an autograph or two for a couple of truly special people.

“His ability to orate is second to none. He was able to answer all of our questions honestly and even through his own touch of humor. His passion for the game of baseball and the revival of youth baseball was evident. It was an once-in-a-lifetime opportunity for our community to hear Jim Leyland speak on so many different topics.”

Johnson circled back to just who will benefit from the park upgrades.

“This fundraiser will benefit everyone that uses any of the fields at Broome and Whaley Park,” he emphasized. “We have thousands of youth baseball and softball players that use the fields, as well as hundreds of high schoo-aged (players) and adults.

Key to the timeline of the upgrades said Johnson is the upcoming National Qualifying AABC Connie Mack World Series Baseball that the GFBSA is hosting July 10-14.

“This tournament will be only one of four tournaments in the entire country that is an automatic qualifier to the AABC Connie Mack World Series,” Johnson explained. “The winner of this tournament will also receive $10,000 as a travel fund to get to the World Series in Farmington, New Mexico. We have teams registered from Nashville, Tenn., Chicago, Michigan, New York, Canada, Florida, Texas and Puerto Rico. We are limiting the field to 16 teams and hope more Michigan teams will take advantage of this opportunity.”

“Ultimately, it is this tournament that is the driving force behind our Park improvement plan,” said Johnson. “We understand that a tournament of this magnitude is going to draw teams from all over the country to Flint, Michigan and specifically, our parks. There is a lot of pressure to show the country that there are some great things that do take place in Flint.”