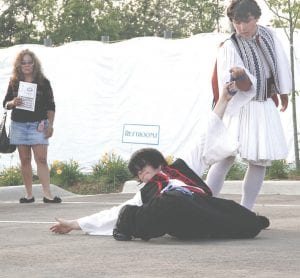 (Top) The Greek Festival is known for its authentic Greek cuisine made from scratch with the freshest of ingredients. (Above) Visitors to the festival will once again be treated to Greek dancing and live entertainment throughout the event which runs from June 24-26.

GRAND BLANC — A taste of Greek culture is returning to Grand Blanc this weekend as Assumption Greek Orthodox Church hopes for a bigger and better run for its 2011 Greek Festival.

The Greek festival was revived last year for the first time in 15 years and organizers said they were pleasantly surprised with the amount of community support they received.

“We have a lot of volunteers inside and outside the Greek community because everyone just likes to help out,” said Pat Pavlis, co-chair for the event. “It is just one big party.”

Functioning similarly to last year, Pavlis said only a few minor changes will be taking place at the event, which runs June 24 and 25 from noon until 11 p.m. and on June 26 from noon until 8 p.m. at the church, located at 2245 E. Baldwin Road.

“The event grounds are going to be set up a little differently to be more conducive to a party atmosphere and parking will be much easier this year as well,” Pavlis said. “Last year when we held this our new church had just been built in April and in June we started the Greek Festival back up, so this year we did some minor adjustments and began organizing more in advance.”

Pavlis said the event will still cater to authentic Greece traditions through a real, homemade Greek menu — featuring dishes such as spinach pie, gyros, stuffed grape leaves and flaming cheese — live Greek entertainment and the marketplace selling a number of Greek jewelry pieces as well as T-shirts and pastries such as baklava and honey puffs.

“The food is a big hit for this festival,” Pavlis said. “Everything is homemade and we don’t skimp on the ingredients. The ladies have been hard at work preparing the food and making sure everything will be fresh for our visitors.”

Another big hit from last year was the Greek dancing. Pavlis said she feels locals will once again be pleased that the Assumption Dancers, Saginaw Dancers and Kiklos Dance Group Detroit will all be returning for performances that will run on Friday and Saturday at 2 p.m., 5 p.m., 8 p.m. and 8:30 p.m. with a special 5:30 p.m. performance being added on Saturday as well and performances on Sunday at 1 p.m., 3 p.m., 4 p.m. and 6 p.m.

Aside from the food and dancing, Pavlis said they will once again have a beer tent for those ages 21 and up as well as bounce houses and face paintings for the children to take part in. Tours of the church will also be given during the festival.

“If all goes as planned, we are expecting a big showing,” Pavlis said. “Right now though, we are all just really excited and looking forward to this weekend and hoping the weather pans out.”

Cost is $2 per person with proceeds going toward the church’s building fund to help keep up with building costs. Parking for the event is free