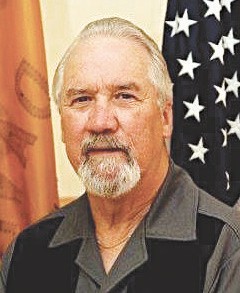 DAVISON — Danny “Gripper” Griggs will be remembered by those who knew him as a man proud of his service to his country, his dedication to the causes he served for his love of his family.

Brother David Griggs said Danny got him involved in many of the groups he belonged to, such as the Eagle, Eagle Riders and the Patriot Guard Riders.

“He always told me, at least once a week, ‘you are my very best friend in the world’,” said David Griggs. “We told things to each other we didn’t tell other people.”

David said he had prostate cancer when he was 41 and brother Danny told him one day he was doing something to help support those with prostate cancer.

“He said I’m doing it just for you, and I said do it for everyone,” said David. “My cancer got the ball rolling with that cause, that was his pride and joy.”

The event, which involved a motorcycle run to several Eagles Clubs in mid-Michigan, always ended with a party at the Davison Eagles which included bands, dinner and raffles.

David described how ‘Gripper’ would finish a prostate cancer ride and the next day he started working on the next year, working straight through to the next prostate run.

“He worked on it all year long,” said David. “It was never-ending. He did that for seven years and his motivation was me. He was a good man with a good heart.”

During the years of the cancer runs, Gripper himself developed and beat prostate cancer.

“You’ve got to get the test done, it’s a preventable cancer,” said Danny Griggs in a 2011 interview. “And its treatable, you don’t need to die if you get this.”

Gripper told the Index then he hoped the benefit would ultimately help fight prostate cancer, but he wanted to keep the proceeds in Genesee County. He said he also wanted to promote awareness about the disease so more men will get themselves tested.

As a member of the Patriot Guard Riders, David said he and Danny would go to Bishop International Airport in Flint around the holidays for 3-5 hours at a time and hold flags and ask young men and women if they were in the service.

“If they were, we’d give them a big hip hip hooray,” said David.

Danny was proud of his service, of being a veteran, and he was proud of his grandchildren. He said family meant a lot to Danny and he recalled him being a great big brother – though at times he would get the best of his younger sibling.

David said growing up their family was poor and the four of them stayed in one room. He said he remembered one time when Danny told him to look in the keyhole and when David did he shot him in the eye with a squirt gun.

David said he told his mom and not long after, Danny told him to look in the keyhole again and when he did, he got shot in the eye again.

“Mom said ‘he just shot you in the eye with a squirt gun, what did you think was going to happen?’,” said David. “He was a nut too – but he made me laugh. I looked up to him and he always told me I was his best friend and he was my best friend too.”

Danny was born January 31, 1947 in Flint, the son of the late Leonard and Lillian (Kinna) Griggs and resided in Flint and Davison most of his life. He worked 30 years for Grand Trunk Railroad.