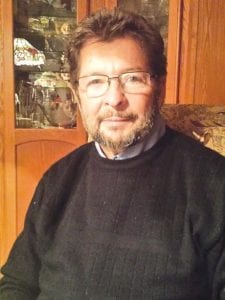 LAPEER — Carl Grondin, Sr. is adamant that his grandson, Kenneth C. Grondin III, did not murder his girlfriend, Andrea Eilber, in 2011. Grondin, Sr. and K.C. Grondin’s parents, Kenneth II and April, are so certain of his innocence that they’re prepared to “spend their last dime” to get him released and are busily preparing for a retrial should they be granted a new trial by the Michigan Court of Appeals three judge appellate panel.

Grondin Sr., 73, knows it will be an uphill battle to prevent K.C. from spending the rest of his life in prison after a jury on Oct. 23 found him guilty of first-degree murder in the shooting death of Eilber. At age 20, Eilber was found dead from a single gunshot wound to the top of her head in the basement of her aunt’s home in Mayfield Township.

To aid their investigation, Grondin, Sr. and his team are offering a $100,000 reward for information leading to the arrest and conviction of the person they believe to be the real murderer. Specifically, the Grondin investigation team is seeking information about a person who entered the Speedway gas station at 1258 E. Bristol Rd. in Burton on November 15, 2011 and used the ATM machine with Andrea Eilber’s ATM card. The vehicle believed to have been operated by that person was then seen driving east on Bristol Rd.

“We think there’s still some evidence in that car,” said Grondin, Sr. “So many things don’t add up. They never found Andrea’s car keys. When they found her car it had the parking brake on. It was known to have been broken for four years. She wouldn’t have pulled it, and my grandson knew it was broke too.”

Grondin, Sr. and the detectives looked for hours for anything police investigators may have missed four years ago in the area where the car was found. “We walked about a twomile stretch along Five Lakes Road. We’re not going to stop looking or trying,” Grondin, Sr. said.

He said they have a suspect they’re investigating, aided by a criminal profiler hired to assist in the search.

Grondin, Sr. was shocked at the guilty verdict and remains dumbfounded as to what evidence the jury found to convict his grandson of murder. He scoffed at the notion suggested by some that K.C.’s motive to kill Eilber was because she was going to break-off their relationship.

“They were planning to get together that evening to watch movies. None of this makes sense,” Grondin, Sr. said.

He continued, “We assumed he was going to be found innocent. They had nothing. They had no motive, no weapon, no witness … We are going to fight this to our deaths.”