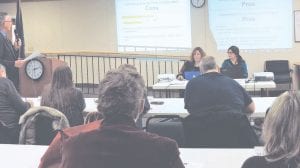 The Suggestion Committee compiled a list of pros and cons in its discussion of a proposed conversion of the township into a city.

FLINT TWP. — What are the advantages and disadvantages of converting the township into a city and changing its name?

At its Feb. 2 meeting, the township’s Suggestion Committee discussed the pros and cons of converting to a city.

At its next meeting on Feb. 23, the group will focus on the pros and cons of only changing the township’s name.

Last week’s meeting resulted in an actual list of pros and cons for converting to a city, generated by comments from all participants.

After some debate, the group voted to postpone a final vote on the proposed conversion until after hearing more about other options including a name-change only.

About 13 points each were compiled in favor of and against the conversion proposal.

Pros included that cities have more flexibility to issue bonds; more protection from annexation; have better retention of public servants due to higher wages and benefits; have opportunities for revitalization; can employ a city manager and choose to have a weak or strong mayor; and may adopt home rule charter tailored to the needs of the community. Also listed as a pro was that a required name would provide an independent identify for the community.

Cons included that conversion would entail more government; require an extensive legal procedure that can take as long as three years; may cost the township the expense of elections, public hearings etc.; may not address residents’ concerns about lowering insurance rates; incur possible tax increases including an income tax levy; and would allow eminent domain activities (government can take private property for public use.)

One committee member asked for more information on legal fees for conversion. Another said he could not see any advantages of city conversion that the township does not already have. The committee also covered impact on school districts (none) and that the Post Office won’t agree to zip code changes which would not alter the Flint mailing addresses or driver’s license info.

Jerry Preston, committee chair, said there is a glimmer of hope that the Post Office might agree to a zip code change or merger for 48532 and 48507. Flint Township has about seven ZIP codes which are shared with parts of neighboring communities including Burton, Swartz Creek, Flushing and Flint.