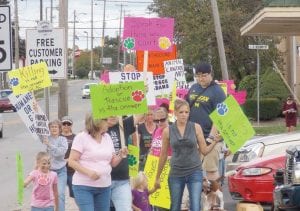 Protesters took to the street in Davison on Labor Day to sound off about the county’s No Kill policy for animal control.

DAVISON — About 60 protesters turned out for a Labor Day march demanding 9th District County Commissioner Pegge Adams step down over a move to remove the ban on the euthanization of stray pets at Genesee County Animal Control.

The protesters called for Pegge Adams to voluntarily resigns her position as chairwoman of the Genesee County Animal Control subcommittee in order to pave the way for what they say is “desperately needed change and improvement.”

Adams said most of the accusations made by the group against her are false and adds she has done everything she can for the animals at the shelter since she became chairwoman of the subcommittee in June.

Since July there has been a “no kill” policy at animal control. But Adams said at that time there were 14 cats and 55 dogs being housed at the facility in Flint.

Now that number is more than 100 of each and animal control is finding it hard to keep up with the cleaning and care of the animals, even with the help of volunteers.

“Everybody just assumes we’re going back to what we had before,” said Adams. “This is not a fast track to euthanasia.”

The protest took place on M-15 just west of Main Street and south of Flint Street. Picketers walked up and down the street bearing signs calling for a “no kill” policy and demanding Adams step down.

“The protest was a success,” said one of the organizers, Kelli Irwin of Davison. “We care about the treatment of the innocent animals at Genesee County Animal Control and we will not stop our efforts to pave way for positive change.”

Irwin said her group has provided many recommendations to Adams to assist in the restoration of dignity and humanity at animal control, but she said most of those have been ignored.

Adams said she and animal control have implemented a number of changes requiring time to see results. New adoption programs have been the highlight of the county’s effort, but so far it still has not been able to bring numbers at the kennel down, she said.

Many of the group’s claims, she said, involve incidents taken out of context.

That, she said, isn’t true. One time she said an officer failed to put a divider in the cage he was cleaning to keep the dog on the side he’d cleaned first while he cleaned the opposite side. That officer was advised this was not proper protocol and dividers have been used since, said Adams.

Another claim was the county was going to use taxpayer dollars to euthanize animals, which Adams said was inaccurate because the department barely functions on the tax dollars it receives for operation.

Irwin, however, said the department needs change and that the group would demand Adams’ resignation from the subcommittee Sept. 4.

Details of that meeting were not available at press time.

“We are going to publicly protest what we believe is one of the major roadblocks to the restoration of dignity and humanity to our animal control department,” said Irwin. “If she cannot see fit to resign for the good of the animals, out of the kindness of her heart, then we will continue to protest until she is removed against her will.”