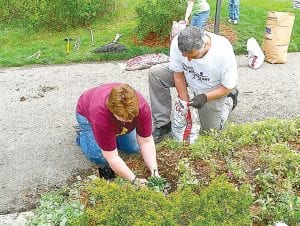 At a park beautification event, Peter Mikelens, M.D., a member of the township Parks and Recreation Advisory Committee, peeled back bark from an ailing ash tree to show markings left by the destructive Asian beetles. Mikelens estimated the tree to be about 15 years old but predicted it will die within another year or so.

It may be too late to save the ash trees but other invasive plants like buckthorn were routed out of the park during an annual clean-up and beatification day on Saturday. 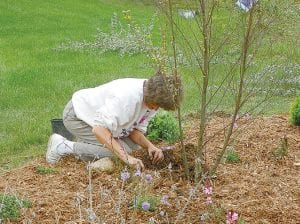 Margaret O’Sullivan, a Gleaner member from Monrose, plants Columbine in one of many flower beds at the park.

Mikelens, who also is a member of the Gleaner, Greater Flint Area Arbor, provided informal nature talks about park features including taking a group to see trilliums in bloom and knowing what to do when one of the youth volunteers had a mild allergic reaction to autumn olive.

Getting more young people involved in conservation work was one of the reasons for participation by the 4-H Club and the youth group from Faith Missionary Church.

One girl found an odd looking plant with wiggly, gelatinous fingers that she planned to take to school for show and tell. She brought it to Mikelens for more information. He identified it as cedar-apple scag, a fungal disease, which is transplanted by spores blowing in the wind.

The overall mission of the day was to spruce up the park and make it more appealing for people to want to come there to walk, jog, bike and skate and otherwise enjoy nature, Mikelens said.

It was the fourth year the Gleaner arbor has spearheaded the park cleanup and provided funding for many of the materials used Saturday. Keep Genesee Beautiful also provided $500 to purchase flowers and planting materials, Mikelens said.

There are more than 1,300 Gleaner arbors. Founded in Michigan in 1894 to provide insurance for farmers, the Gleaner has evolved into a fraternal organization that does community service work for fun and fellowship. Gleaner members performed more than one million hours of volunteer service, donating nearly $297,000 in their communities during 2010-2011, according to its website.