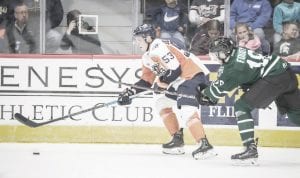 Flint’s Ty Dellandrea carries the puck along the boards in the home opener against the London Knights. Photo courtesy Flint Firebirds

FLINT – The Flint Firebirds win-less streak remains in tact and extended to six in a 6-2 loss to the Guelph Storm at the Dort Federal Event Center on Saturday.

Guelph grabbed the lead with the only goal of the opening period and then added to it with two goals early in the second. Flint captain Ty Dellandrea cut into the deficit with a goal just a couple of minutes later, but Guelph finished the period on a strong note. In the final few minutes of the frame, the Storm scored twice more to make it a 5-1 game after two periods.

Just 16 seconds into the final stanza, Jacob Winterton rippled the mesh for Flint’s final tally of the night. Guelph’s Mark Woolley added an insurance goal moments later to put the game away.

The Firebirds remain in last place in the West Division at 0-6-0-0. They hit the road today to take on Sault Ste. Marie before a Friday-Saturday home stand against North Bay and Kitchener respectively.