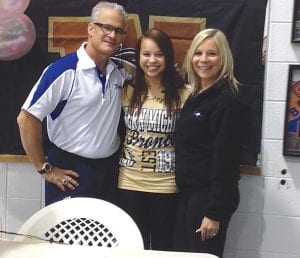 Brittany Aragon is flanked by coach John Geddert and his wife, Kathryn, after signing her letter of intent to attend Western Michigan University.

Aragon, 17, was offered by WMU last winter and verbally committed to the Mid-American Conference school at that time. She made it official with last week’s signing at Gedderts’ Twistars Gymnastics Club in Lansing, where she is a member.

Aragon also had interest from Rutgers, Utah State, Michigan State and Pittsburgh, among others. She chose Western Michigan partly because that school let her know she was still welcome there even after she dislocated her elbow in a fall from the bar last December.

“Their coach is really cool,” Aragon said. “I’ve known him for a while, so it wasn’t that hard picking Western Michigan. It’s really homey, and all the girls are like a big family.”

Aragon overcame her injury to place eighth in the nation in the floor exercise. A Level 10 gymnast, she has made the Region 5 national team in 2009 and 2011 and is a Twistars teammate of Olympic gold medalist Jordyn Wieber of DeWitt. Club owner John Geddert was the U.S. Olympic team coach this summer.

Aragon has been involved in gymnastics since age four and trains at the Lansing club five days a week. Despite that hectic schedule, she maintains a 3.89 grade-point average and was voted Homecoming queen last month.