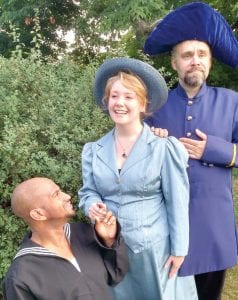 From left: Humble sailor Ralph Rackstraw (Aaron McCoy Jacob) is in love with the Captain’s daughter (Emily Carter) to the dismay of Captain Corcoran (David Lindsay).

FLINT — The Kearsley Park Players’ summer season continues with the Gilbert & Sullivan musical romp “H.M.S. Pinafore” to be presented at the historic Kearsley Park Pavilion for one weekend only, Aug. 25-28.

When it first opened in London in 1878 “H.M.S. Pinafore” was an immediate triumph and became Gilbert & Sullivan’s first international sensation with numerous productions on both sides of the Atlantic. The story takes place aboard the Royal British Navy warship HMS Pinafore and is filled with music, mirth and silliness.

This is the third Gilbert & Sullivan show to be produced by the Kearsley Park Players in as many years and their previous productions — “Pirates of Penzance” and “The Mikado” — drew sellout crowds and rave reviews.