Hail to the Vic’s 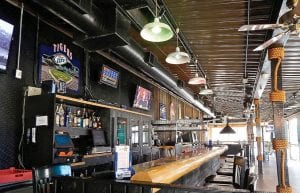 Vic’s is a new sports bar on Corunna Road offering a comfy setting for group gatherings.

FLINT TWP. — Just in time to meet up with friends (and rivals) to watch the storied Michigan vs. Michigan State football game on Saturday, Vic’s sports bar has opened as a sidekick to Ruggero’s Italian Restaurant, 5311 Corunna Road.

The sports bar is a new venture for Ruggero’s which relocated in August from its roost of 18 years at the Lincor Plaza on Linden Road.

Vic’s opened quietly about two weeks ago to make for a smooth transition but word-of-mouth promotion is starting to build a crowd, said Susan Vallecorsa, one of five owners of the family-owned restaurant.

Vic’s s named for her dad Vic Vallecorsa, a big sports fan, who with his wife Velda started Ruggero’s in 1958.

“Everyone who has come in has commented, ‘I feel very comfortable here,’” she said noting that the busiest nights so far corresponded to the (Tigerless) World Series and a Redwings hockey game viewable on one of Vic’s seven 60-inch bigscreeen TVs. A birthday party and a wedding celebration added to the multipurpose mix of Vic’s as a destination place for general group outings, she said. 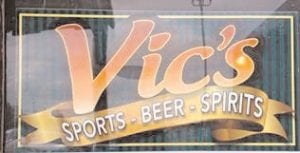 Vic’s has a separate entrance, later operating hours than the restaurant and its own menu that features some Ruggero’s favorites such as lasagna and pizza.

A cozy rustic setting with booth, bar, couch and table seating is surrounded on three sides by nearly floor to ceiling windows with a view to a sandlot outside that may be opened for beach volleyball next summer, Vallecorsa said.

Other features include a round gas fireplace, a digital jukebox and dart game and three closed-circuit monitors for playing the Michigan State Lottery’s Club Keno which is proving to be very popular.

Other than making a few cosmetic changes — furniture, seat coverings, lighting — not much was needed to transform the space from its former incarnation as the Voodoo Lounge when it was part of the short-lived New Orleansthemed Big Easy restaurant. The 10,000- square-foot building is best known as Bubba’s Roadside Inn, which operated there for several years.

For now, Michigan State has the edge on displayed sports memorabilia. Two signed and framed jerseys are from MSU basketball legend Magic Johnson and Jim Morrissey, a Flint Powers and MSU football standout who won a Super Bowl with the Chicago Bears and also played for the Green Bay Packers.

Mateen Cleaves, another Flint-based MSU basketball star, is a regular at Ruggero’s and is helping them acquire sports memorabilia, Vallecorsa said.

Efforts also are being made to collect sports items to display from local schools including Carman-Ainsworth, Flushing and Swartz Creek.

So far Vallecorsa has hired a bar manager and two servers to operate Vic’s and more will be added as needed, she said.