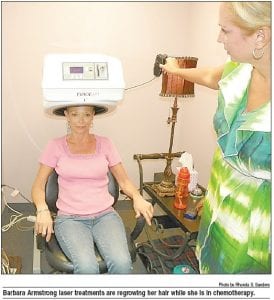 FLINT TWP. — Some might call it a miracle but cancer patient Barbara Armstrong of Flint simply calls it “exciting” her hair is growing back while she is undergoing chemotherapy treatment.

Battling cancer eight times in the past 15 years, Armstrong, 48, has coped over and over again with her hair falling out during chemo.

Since her first diagnosis of breast cancer, it’s come back in her liver four times, her spine twice, her pelvis and left hip socket and her brain fluid, she said.

Diagnosed in March with liver cancer, Armstrong started a new round of chemo so aggressive that it is only being used on one other patient at the Great Lakes Cancer Institute. All of her hair fell out after only one treatment.

“At first, I couldn’t believe my eyes,” she said. “I wondered if my chemo was working. I had never experienced hair growing during my treatments before.”

Miracle Hair Growth Centers offer a cosmetic laser treatment that focuses solely on growing hair for clients suffering from all kinds of hair loss including pattern baldness and alopecia.

Armstrong was the first client accepted at the center who is actively in chemotherapy, although they have worked with clients post treatment.

“We were excited to see if laser treatments during chemo would aid in hair growth,” said Nicole Wallace, center co-owner. “We were optimistic but realistic at the same time.”

“My hair has not been this thick since the first time I lost my hair,” said Armstrong, noting that after chemo it’s grown back so thin she continues to wear a wig.

Cancer has been part of Armstrong’s life for 15 years now but her fortitude is so strong that her doctor asks her to counsel other patients.

“Barbara is an amazing woman,” said Wallace. “Her fighting spirit and energy is addictive.”

Armstrong said her children were ages 2, 6 and 8 when she was first diagnosed.

“I had a reason to live,” she said of her determination to raise her children. The youngest just graduated from high school.

Armstrong expects to have enough hair growth by the end of August to stop wearing her wig.

The center opened in October 2010 and is the only one in Michigan offering the equipment they use, said Christina Ortiz, coowner who is a licensed cosmetologist and hair revitalization specialist.

Armstrong said she does not feel anything during her laser sessions.

Ortiz said most of their clients are women but only about 10 percent are cancer patients. Laser treatments are considered “cosmetic” and not covered by medical insurance but the center has payment options to work with clients, she said.

Wallace said laser treatments have been popular in California and Europe for more than 20 years.

Armstrong is thankful to have a center so close to home.

“I’m excited to have a full head of hair again after losing it so many times,” she said.

Wallace said that initial consultations at the center take about an hour and are offered for free.

They are very honest with people about whether laser treatments can help, Ortiz said.