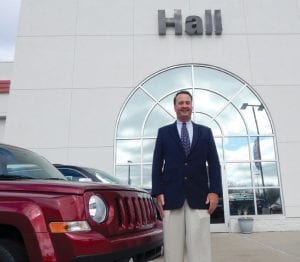 Jim Hall has built his business through hard work, respect for employees and customers and “doing the right thing” in his community.

Jim Hall brings a lot of humanism to his leadership role as owner of Hall Chrysler Jeep Dodge Ram in Fenton.

Hall broke into the car business as a teenager working as porter at Oakland Dodge in Madison Heights. After earning a degree with an advertising major from Michigan State University, he took a sales job working for a friend who owned a car dealership in Chicago. He worked his way up to general manager there before returning to Michigan and another general manger post at a dealership in Midland.

“Having done nearly all of the jobs there are to do at a car dealership, I have respect for each employee in each position,” Hall said. “I’m not a ‘that’s not my job’ kind of person,” says Hall. “I’ll do whatever is necessary and that’s the kind of person I want in my company.”

After 12 years in Midland, Hall knew it was time to either exit the business or go it on his own. He had nearly settled on buying a dealership in South Carolina when he became aware of an opportunity in his own backyard. In May of 2005, Hall bought the former Fenton Chrysler location and put his name on it.

Hall invested more than $100,000 in the dealership early on and has made ongoing upgrades ever since to build and maintain a state-of-the art facility.

“We are fortunate to have a lot of good employees who have been with us for quite a while,” Hall says of his staff. Jim and his brother Tim Hall, who is the General Sales Manager at the dealership, have grown the business from 33 employees when they took over to 50 employees today.

Jim Hall’s eyes glisten as he talks about serving customers, employees and the community at large. Treating people with respect, he says, is the key to his success. “Just do the right thing and good things will happen,” Hall says as he recalls stories of taking care of customers and employees who have repaid him in kind with loyalty and business.

Hall’s ethical philosophy carries over to the work Hall Chrysler does for the community with sponsorships and donations to a variety of charitable and service organizations including the CrimFit Youth Program, Family Promise, St. John’s Applefest, Holy Family Operation Outreach, Powers Catholic Golf Outing and the Greek Festival of Grand Blanc. Hall is also funding the special camouflage jerseys for this year’s Fenton Wounded Warrior football game.