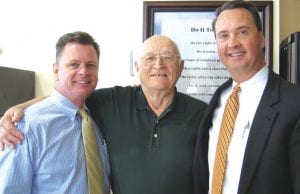 FENTON — Brothers Tim and Jim Hall were in a tight spot a little over eight years ago when they were opening Hall Chrysler in Fenton.

Then Ed Hyypio walked in the door and said, “I am here to help you in any way possible to help you get your business started.”

“I have extensive experience in the automotive industry, but can do just about anything!”

It sounded too good to be true, but Jim and Tim decided to give him a shot, as they needed any help they could get at this point.

So began the story that recently brought Jim Hall to say so often in life we wait until someone has passed away to pay special tribute to how they have impacted our lives.

He and Tim decided they had been so deeply moved by Hyypio, that they wanted to throw a celebration in his honor.

Starting the Hall dealership had left the brothers spinning in circles trying to get the dealership up and running.

Tim Hall said, “We didn’t know which way was up at that point.”

Hyypio has proven to be a major asset to the Hall Chrysler dealership.

There is little he won’t do from snowplowing to arranging dealer trades or local and nationwide deliveries.

“I love to drive,” said Hyypio.

In his many travels, Hyypio carries a book with roughly 1,500 names of people throughout the country that he has met throughout the years. When he is passing through a state, he might make a phone call to a friend from the past or just stop in for a surprise visit.

Hyypio often offers to lend a hand to whatever a friend might need — if their lawnmower is broken, he will fix it, or they have a leaky drain, he will help them out — no matter how long it has been since they last met.

He never forgets a friend and is the kind of person who would give you the shirt off his back.

Jim Hall told the story that one day he asked Hyypio to take him to the airport to catch a flight. He would need to meet Hyypio at 5 a.m. at the dealership to make his flight.

A snowstorm came through during the night but when Jim arrived in the morning, Ed had already been there for some time and had shoveled a pathway to the office door for Jim to gather any belongings he needed from his office before they left.

According to the Halls, Hyypio has also been responsible for recruiting several important employees to their organization.

A fellow co-worker, Barry Green, said “I met Ed in a doughnut shop and was looking for a job. Ed arranged for me to meet Jim Hall and next thing I knew I became l part of the team.”

Jim Hall is happy to recognize Hyypio not just for his valued work as an employee, but his outstanding role as a citizen.

He visits nursing homes several times a month and sometimes simply stops at a nursing home near where he is traveling and will stop at the front desk and look to see if he recognizes any names of people he knows.

He has also been known to ask who hasn’t had a visitor in sometime and will spend the evening telling stories and listening to stories from these residents.

A co-worker said “One day I stopped with Ed at a nursing home. He knew 18 of the residents! We visited every one of them!”

Hyypio also collects and delivers food personally to the needy three times a week. He was born in Houghton County in the Upper Peninsula. and later moved to Fenton which he calls home. He is a teamster retired from General Motors and speaks three languages. He was also a Constable for the State of Michigan.

Hyypio is extremely active in his church where he volunteers his time driving a bus for them and serving as an usher. He is married to Evelyn, and has five children, 13 grandchildren and 10 great grandchildren.

Hyypio is right at home at Hall Chrysler. He said: “Jim and Tim Hall have become my adopted sons.”

He is still going strong at 85 years old.