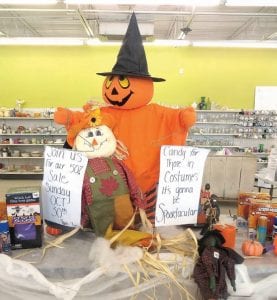 The Goodwill store on Miller Road, aka Ghoul-will, is hosting a Halloween half-off sale and an opportunity to purchase and/or show off your costume.

FLINT TWP. — Part of the fun of Halloween is having more than one place to show off costumes. Several spooktakular venues are brewing to do that this year.

Coming up this weekend is a Halloween Celebration, a Barnes & Noble Bookfair fundraiser, sponsored by The Carman-Ainsworth Education Foundation from 11 a.m. to 6 p.m. on Saturday, October 22, at Genesee Valley Mall. Costumes are encouraged. Spooky story times will be held at 11 a.m. and 1 p.m. followed by a Costume Parade 30 minutes after each story. Trick or Treating and Halloween crafting also will be provided.

A portion of all Bookfair proceeds will benefit the C-A Education Foundation. Those who can’t attend the event still can support the Foundation by making online purchases from October 22 through October 26 and entering the Bookfair ID 11978160 at checkout.

Trick or Treaters can get in costume again the following weekend for the annual Lil’ Monsters Halloween Bash, sponsored by the Genesee District Library (GDL), from 10 a.m. to 1:15 p.m. on Saturday, October 29th. Pick up a trick or treat bag outside of the library in the Sears wing.

Mall-wide trick or treating will be from 10 a.m. to noon followed by storytelling and a spooky animal show in the center court. Dance to the Monster Mash at Center Court at noon then stick around to watch the Wildlife Safari spooky animal show from 12:15 to 1:15 p.m. After the show, head over to the Genesee District Library branch in the Sears wing to pick up a free book.

Goodwill Industries Mid- Michigan will join the spirit of the holiday with a half-off sale from 9 a.m. to 7 p.m. on Sunday, October 30. Everyone wearing a costume will get free candy. All Goodwill stores are participating including the Flint Township branch at 4340 Miller Road, next door to the mall.

And to wrap up the holiday celebration, the township board has set door-to-door Trick or Treat hours from 5:30- 8 p.m. on Monday, October 31.