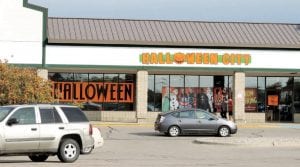 Above, the Halloween City store has a less visible location this year but makes its presence known with easy to spot window decorations. Similarly, the Spirit Halloween store has moved to a less visible location this year in one of the vacant suites beside the Best Buy store, but announces its presence on the pylon sign out front.

FLINT TWP. — As sure as summer turns into fall, the reopening of Halloween stores is a seasonal sign.

They set up shop in vacant stores and move on, sometimes every year, when permanent tenants reoccupy those empty stores.

For that reason, both recurring Halloween stores have moved to new locations this year.

This year, Halloween City is selling it spooky wares at 3567 Miller Road, next door to Petco in the Genesee Crossings shopping plaza. The building was last occupied by a Tuesday Morning upscale, off-price retail store. Its last-year’s haunting ground, a spacious standalone building at 3426 Miller Road, is now the new home of Summerset Salon & Day Spa.

Spirit Halloween store this year has returned to a former haunt at 3630 Miller Road in the Buick City Center plaza, adjacent to Best Buy. Last year, it operated out of a long-vacant building at 4135 Miller Road, formerly Border’s bookstore, which has now been permanently filled by a DSW shoe store. 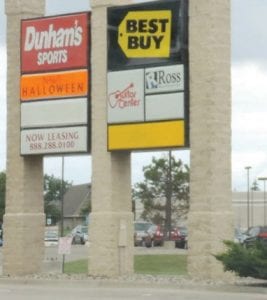