Hamady grocery store closer to its comeback in Genesee County 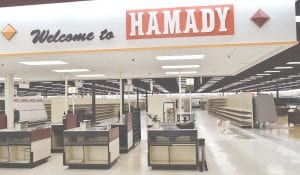 A look at the inside of the new Hamady store on Pierson Road in Flint.

FLINT — Shoppers on the north end of Flint will soon have a new destination for buying groceries, thanks to the return of an old area favorite: Hamady Complete Food Center, formerly known as Hamady Brothers.

Jim McColgan, president of Hamady Complete Food Center Inc., held a press conference Tuesday at the store’s Pearson Rd. location to announce that his business is one step closer to its grand opening.

“Outside of putting tags and food on the shelves, we’re about 98 percent ready to open,” he said. “We’re hoping that it’s within five to six weeks…no later than June 20.”

Hamady was originally slated to be open by March, but the process has been delayed for several months. McColgan said that the primary reason for the delay centers around negotiations with the store’s suppliers.

“We are working out a funding program with our supplier,” he said. “It will be (finalized) probably by the end of this week. Then we have to get our certificate of occupancy from the city.”

McColgan also expressed his appreciation for Flint Mayor Karen Weaver’s support of the project, as well as for the help he’s received from the City of Flint’s building department.

Founded in 1911, the Hamady Brothers supermarket chain operated numerous stores across Flint and Genesee County for decades. The brand’s return comes 26 years after it was bought out by Kessel Food Markets, which itself was later sold to Kroger.

For McColgan, bringing back the Hamady grocery stores is more than just bringing back a local favorite; it’s a mission to help revitalize the community.

On top of helping to attract other businesses to the area, McColgan envisions the store holding classes for kids and adults and hosting church and community events.

Once completed, Hamady is projected to employ up to 90 people, with positions paying an average of $12 to $14 an hour. McColgan said that the store still needs to fill at least 20 job openings – eight of which are managerial positions.

Applicants are encouraged to visit the Michigan Works website to find job openings for the Hamady Complete Food Center.