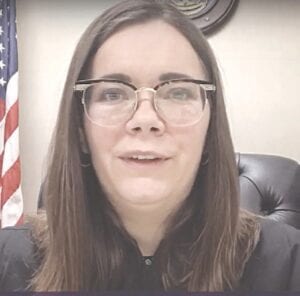 BURTON — Typically, the investiture of a judge to the bench is an event held in an auditorium where the person being sworn-in to office can mingle with peers, friends and family.

But when a judge takes office during a pandemic, and social distancing is required, people have to get creative to accomplish a similar ceremony.

When Jessica Hammon was appointed by Gov. Gretchen Whitmer to the 67th District Court Bench, 2nd Division in Burton, the COVID-19 crisis meant she was unable to have the typical live investiture. Therefore, officials decided to do a virtual video investiture.

“We had a lot of participation from local judges and elected officials and received massive positive feedback,” said Judge Hammon. “I believe this was the first investiture if its kind, at least it is the only one I’ve seen.”

“I first met judge Hammond years ago at a political function. At that time, she was still in college. She was contemplating going to law school,” said Odette. “She met me, came over explained what she wanted to do, explained her plan, and I was so impressed from that first meeting I mentioned to her family that someday, she might end up being a judge. Well, that day is today.”

Hammon was named to the 67th District Court bench to replace Judge Mark Latchana who was appointed to fill a vacancy on the Circuit Court.

“It’s an honor in and of itself to be appointed during this time, more is expected of us,” said Hammon, regarding the COVID-19 crisis. “We have to learn an entire new way of being a judge. I believe it’s the reason I received appointment. I have…the community ties, experience with the law, I was the Bar president and I have the respect of the people I work with.”

Hammon, 38, grew up in Burton and is a graduate of Atherton High School. She graduated from Ave Maria Law School and has been in the private law practice for 12 years.

After she graduated law school and after she finished an internship with the Genesee County Prosecutor’s Office, she went to work for Justice Marylin Kelly of the Michigan Supreme Court.

Odette said she built her practice up from the ground floor.

She has also served as a mediator at the Genesee County Community Resolution Center and was named the Eastern Michigan Pro-Bono Lawyer of the Year, as well as being named to the Pro-Bono Honor Roll of the State Bar of Michigan. Hammon was also president of the Genesee County Bar Association from 2018-19.

Haskins said he is very proud to have Hammon serving as 67th District Court judge in the City of Burton.

“I can’t say how proud I am to have one of our own, home bred, born and raised in Burton representing the 67th district court her in Burton,” he said.

Those sentiments were echoed by Burton Police Chief Brian Ross who added he was also proud to have a fellow Atherton graduate represent the city of Burton.

Hammon is the daughter of Ted and Linda Hammon of Davison. Her father is a former Burton City Councilman, State Representative and Genesee County Commissioner.

She was sworn in via closed circuit television by 67th District Court Judge Jennifer Manley and her judge’s robe was placed on her by husband Elliot Parke.

Judge McCormack congratulated Hammon on her appointment and offered some words of praise.

“Instead of seeing problems and obstacles, (Hammon) sees opportunities. For helping at-risk kids find their way, for building connections between the legal profession and the community,” she said. “For giving people without means a voice in the court system. And she does it with innovation to boot. She looks for ways to help people solve problems and make improvements and then use her talents and skills to help them get there. Can’t imagine a better quality in a judge.”

Hammon said she was “honored and humbled” by the many elected officials, community leaders, friends and family who took the time to record a video.

“Throughout my career I’ve made it a point to be knowledgeable in the law, to be fair to all I encounter and to participate in my community. I plan to continue these things while I’m on the bench,” said Hammon. “I join a group of dedicated public servants who serve our county well. But for me, sitting on the second division of the 67th District Court is particularly meaningful. It’s meaningful because this is where I am from. I grew up in Burton, I still live here. This is my home. And I’m proud to serve as your judge.”

To see the video investiture of Judge Hammon, visit youtu.be/GAergcGEDhA.