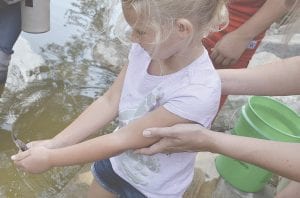 FLINT — Dozens of Genesee County residents got to participate in an historic conservation event last Saturday by releasing juvenile lake sturgeon into the Flint River.

In all, 125 hatchery-reared sturgeon were reintroduced into the Flint River at the Mott Park Recreation Area as part of an effort to restore the species to the Saginaw Bay Watershed. The event was organized by the Saginaw Bay Watershed Lake Sturgeon Restoration, which is being led by the Michigan Department of Natural Resources (DNR) and a coalition of state and local partners.

Not only did spectators get to see the sturgeons up-close, but they also got to participate in the release effort itself at Mott Park’s new paddle launch. Under the supervision of event personnel, participants gently scooped the five to seven inch fish out of buckets and placed them into the water one-at-a-time.

Many adults and children who took part in the release smiled with delight as they watched the juvenile fish swim away into the river. 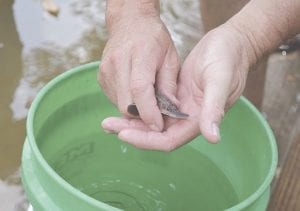 Rebecca Feweda, Executive Director of the Flint River Watershed Coalition, said that the reintroduction of lake sturgeon will raise appreciation and awareness for the iconic fish.

“I think about it in terms of growing up never seeing a bald eagle, which are now common sightings all along the Flint River,” she said. “In that same vein, it’s exciting to think that the sturgeon released today will build a population that our children and their friends and family will see regularly as they fish and recreate along the Flint River.”

Members of the public also had the chance to “adopt” a newly-released lake sturgeon through the Saginaw Bay Adopta Sturgeon program.

When fully mature, lake sturgeon can grow up to seven feet long and weight up to 300 pounds. Though once abundant in the Great Lakes, the species was nearly eradicated due to overfishing and habitat loss.

In recent years, many partnerships and projects have launched around Michigan to restore sturgeon habitat and reintroduce the endangered fish into their native ranges, including the Saginaw Bay Watershed through the Cass, Shiawassee, Tittabawassee and Flint rivers. Lake sturgeon release events were also held last Saturday at the Tittabawassee River in Midland, the Shiawassee River in Chesaning and the Gunzenhausen Walkway in Frankenmuth. 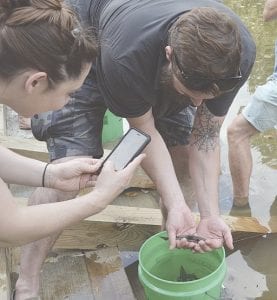